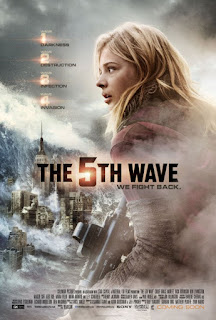 What are the waves, this being the fifth, you may ask.  The Fifth Wave refers to a series of attacks by an alien planet that needs earth’s resources.  Their invasion comes in waves, such as a gigantic power outage, an earthquake with tsunami, Asian flu, occupation (including occupation of individual humans), and finally full-on invasion with the purpose of killing all survivors.
Cassie (Moretz) is the narrator who is in high school when the first wave hits.  She is living with her mother, father, and younger brother and interested in the usual teen preoccupations.  She has a crush on a classmate and is teased by her best friend.  With progressive waves of alien attacks, she anguishes about her losses, but is determined to rescue her brother who was taken away with other children in a school bus on orders of the U.S. military.  Cassie was supposed to go too, but missed it when she went to fetch her brother’s toy bear.
What follows is a chronicle of her experiences in trying to survive and rescue her brother and never knowing whether a person she meets is enemy or friend.  The aliens have taken to “occupying” human bodies as a control measure.  All this adds up to a pervasive paranoia in which no one knows whether a person is human or alien.
The first half of this drama is intriguing (although not really original in conception), but it eventually devolves into a morass of predictability and romantic kitsch, ending with the pronouncement that “love is not a trick; it’s real.”
Moretz is at her usual fine skill in portraying a young woman with smarts, always ready to learn, and showing a nice range of emotional expression.  Her two co-stars, Robinson as Ben and Roe as Evan Walker, match her very well, and provide the opportunity to prove that females can be as strong and effective as males.  Further, the character of Ringer (Maika Monroe) is a sassy upstart who uses her brain and skill to figure out a situation and act decisively.
The portrayal of males and females is perhaps the only plus in The Fifth Wave.  Females are both nurturing/caring and skillful in fighting, and males are protective and strong while also giving females space to show what they can do.
Enrique Chediak’s cinematographic art comes through repeatedly, most strikingly when Cassie and her brother have climbed a tree to escape the tsunami.  He shows a bird’s eye view of them that quickly evolves into a palette of leaves, making the viewer wonder if they survived.
While it’s not perhaps as original as desired, Director J. Blakeson has put together an interesting apocalyptic tale with talented actors.  I take a bit of a jaundiced eye toward it in its playing up the existence of a threat implying that everyone should be armed at all times.  Guns are highlighted so much I began to wonder if the NRA helped finance the movie.

Gun advocates will love this movie; others, perhaps, not so much.