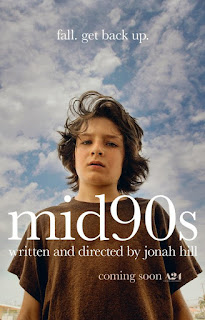 Stevie (aptly played by Suljic) is a kid you immediately feel sorry for, and that’s often how the other characters in the film relate to him.  And he really needs it in order to escape a bully brother at home and to fit in with a rough group of street kids.  This quality gives him entry into the group in the beginning, but ultimately it’s his fearlessness that wins him respect.  He’s smaller than the other kids and desperately practices to ride a skateboard, the tie that holds the group together.
It’s a colorful group, most with nicknames, and it’s Ruben (Galicia) who first helps Stevie into the circle with unhelpful (wrong) advice and an order for Stevie to bring him $40 for a skateboard he wants to sell.  We soon meet the one calling himself Fuckshit (Prenatt)—or he got that name from saying the word repeatedly, followed by “That’s dope.”   There’s the one the group regards as rather dim, so he gets the nickname Fourth Grade (McLaughlin), but he does hope to make a film one day, so his camera is a steady companion.  The standout—and the only one with good sense and aspirations—is African-American Ray (Smith), who is working hard at becoming a pro skateboarder.  He can break up fights, show empathy and understanding, and serve as a role model, which largely passes over the others, but is a kind of salvation for Stevie.
Jonah Hill, the writer/director, wants to depict life in the 90’s in L.A. when he was growing up.  He captures this seemingly very well (it wasn’t my world, so I can’t really judge), and perhaps wrote the Stevie character from his own experience of making efforts to fit in with a group.  (I’m inferring this from his bio in which he contrasts himself with Brad Pitt.)  The composers Trent Reznor and Atticus Ross augment the 90’s feel with their music drawn from or based on that period, although I found it to be too heavy-handed at times, particularly when other sound effects were combined with the music.
For me, Mid90s has an unfinished quality; the strains of each character are incompletely told.  We hear a bit about their home life and who they are, but not enough to get a firm picture.  For instance, we’re told about Ruben’s parents abusing him and his sister, and similar “one-shot” descriptions for others, but are told essentially nothing about Ray who, with Stevie, was the most potentially interesting.  The characters played by Lucas Hedges and Katherine Waterston are sadly lacking in description and in action.  Their roles should have been greatly expanded for us to understand their behaviors.  Both actors are greatly underutilized, which is a shame, considering their talent.
I don’t know if Jonah Hill intended to paint such a bleak picture of kids in the ‘90s in L.A., but    I found this depiction very sad, with kids trying to make their way with little guidance from family or school.  When Stevie’s mother says, “We used to talk!”, wanting to know more about Stevie’s new-found friends, I could empathize completely. There is little here to inspire; what’s missing is any kind of moral or insight to bring the story home and give it meaning.

A boy without much of a family makes one with skateboarders on the street.

Posted by donnarcopeland at 12:38 PM