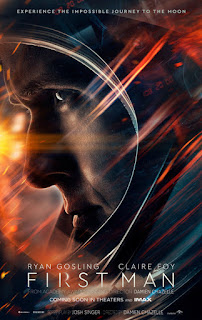 First Man is Damien Chazelle’s sharp turn away from the musical orientation of his previous hits, Whiplash and La La Land.  We do see one tender song piece near the beginning of the movie when Neil Armstrong dances nostalgically with his wife.  Thereafter, our ears are bombarded with the roars, bangs, creaks, and groans inside spacecrafts.  What he has retained in this account of NASA’s efforts to land a man on the moon before Russia in the 1960’s are intense interpersonal relationships fraught with passion, nerve-wracking episodes, and grief.
More than anything, the film gives an inside look at the early space endeavors, their costs in human life and money, the intense pressure all immediately involved and their families experienced, and the mixture of bonding and competitiveness that took place among the astronauts.  It presents a brilliant picture of how men work together in a competitive, high-pressure setting, which is likely to be in contrast with how women relate to one another in such an environment.  (I’m thinking specifically of the women in the film Hidden Figures, for example.) Here, there’s camaraderie, but little of the deep emotional sharing we saw in the earlier film, and much more competitiveness.
First Man is as well a portrait of the heroic astronaut Neil Armstrong (empathically played by Ryan Gosling), who became even more reticent after the death of his daughter, as perhaps his way of dealing with the grief.  He’s a man who doggedly pursues his goals without being deterred by setbacks, does not hesitate to use his own judgment in place of what he is told to do, and although his emotions are tightly hidden and controlled, this defense can be broken through in certain circumstances.  The latter achieved by his wife Janet (Foy) in a scene that highlights her influence, and may be an award-winning performance for the actor.
Chazelle has also retained two colleagues from his previous films, composer Justin Hurwitz and cinematographer Linus Sandgren, and brought in Christopher Nolan’s notable production designer Nathan Crowley, to create a powerful account of the subject that is both extravaganza with awesome special effects and deep emotional pulls.
The movie, based on James R. Hansen’s book, can be regarded as of historical value for young people and those seriously interested in U.S. space programs. It’s a serious account that is fascinating and entertaining as well.  A small downside could be the extended scenes inside the spacecraft, which are so noisy it’s hard to hear the dialog and the mechanical focus in the picture is not informative as to what is going on.  I read that in fact it is so noisy inside a spacecraft some astronauts experience hearing loss, so these scenes are not unrealistic; I just have some concern about my own hearing!

A fascinating and apparently realistic look behind the achievement of getting a man on the moon.

Posted by donnarcopeland at 12:07 PM