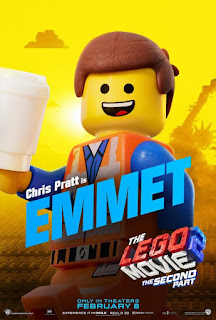 Following upon The Lego Movie (2014), this sequel continues the adventures of the “Master Builders” who started out as resistance fighters against Lord Business and his army of Micro Managers. Emmet (Pratt) and Wyldstyle (Banks) were heroic in the previous story and ended up as best friends in a happy town, Bricksburg, where everyone is special.  It should be noted that Wyldstyle (Lucy as she is now called), is more pessimistic and skeptical, in contrast to Emmet’s sunny outlook. Each would like for the other to change just a bit.
Their town now is a darker, chaotic--maybe cooler--Apocalypseburg that is changed significantly from the sunnier Bricksburg. Within the backdrop of an exciting confrontation between their city and some invaders coming in from outer space (who are wrecking everything faster than it can be rebuilt in a city of Master Builders), Emmet and Lucy become significantly changed for the better.  Emmet is both helped and hindered by making the acquaintance of Rex Dangervest (also Pratt, signifying polar opposite traits in the same person), who is brash and confident and easily counteracts Emmet’s diffidence. When Lucy gets kidnapped, Emmet enlists the help of Rex Dangervest in getting her back.  Their struggles increase insight for Emmet and Lucy; however, Rex’s issues are more complex.
This sequel continues the psychological journeys of the characters that were begun in the first rendition.  And in this sense, the movie seems addressed more to the adult audience than to children.  For example, themes of and questions around romance, marriage, self-actualization, and détente between warring factions make the film more interesting for adults.  The production design and animation are so engaging (almost to the point of overpowering the characters and the story), children are likely to enjoy that aspect of the film; I just don’t know how much of the import of the story actually gets through to them. I suspect little of it.  The beginning scenes are so laden with special effects, it’s often hard to decipher what is going on, especially when the chorus sings, with lyrics that are hard to decipher.
At any rate, there are exciting scenes showing colorful vignettes of the invaders led by Queen Wa’Nabi (Haddish) and the heroic efforts of the Apocalypseburg trio (Emmet, Rex, and Lucy) to protect themselves.  The invaders are clever in “brainwashing” others to join their ranks, including Batman (Arnett) who is seduced into wedding the queen, despite his fiercely avowed bat-chlerhood.   [The manipulative clichéd means by which Queen Wa’Nabi seduces him are some of the scenes I hope do pass over the heads of children.]  But there is a quick twist toward the end of the story that seems to discount the charge of brainwashing.
Tiffany Haddish is clearly the star in this production, with her character’s chameleon-like presentation and witty dialog.  Haddish is perfectly cast, managing to be both outrageous and lovable.  Pratt and Banks also capture their roles in a way that makes them as believable as real people. Numerous cameos of the likes of Richard Ayoade, Alison Brie, Nick Offerman, Maya Rudolph, Will Ferrell, Channing Tatum, Jonah Hill, Ralphe Fiennes, Will Forte, Will Arnett, and still others popping up throughout, do their part in increasing the entertainment value of Lego Movie 2.

The continuing adventures and personal development of Lego characters Emmet and Lucy/Wyldstyle.