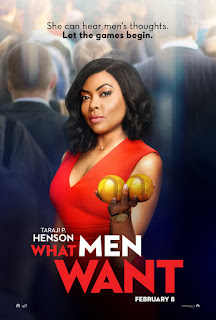 What Men Want is counterpart to Nancy Meyers’ earlier film, What Women Want, with essentially the same plot.  In this version, sharp-edged sports agent Ali (Henson) has to contend with the macho men in her company who are disparaging and pass over her in subtle and not so subtle ways.  But having been brought up by her boxing pro father (Roundtree), she has no trouble throwing her own punches, leading the men around her to regard her as a ball buster.  She, in turn, is dismissive of her gay assistant Brandon (Brener) and his aspirations to become a sports agent in his own right.
There are some entertaining and funny scenes of a poker game (which Ali crashes) and when the firm wants to become the agent for a budding basketball star, Jamal (McGhie), with a helicopter parent (Morgan).  After the front-line male agents put together an appalling video to promote him, Jamal is horrified, and Ali thinks she has a good chance to win him over.  With the plot turn of her visiting a psychic and gaining the ability to read men’s minds, she starts being very successful in poker as well as winning over Jamal and his father.
But Ali’s penchant for topping everyone causes her to cut corners and run roughshod over anyone who can be of use to her, all of which she will have to answer to by the end of the film.
The kind of humor in this film and in its predecessor is not especially appealing to me, although I can understand how others might find it very entertaining. The audience in the screening I attended seemed to have a great appreciation for it.  However, I would have liked to ask them what they thought of the sex scenes, which were rather insensitive in their portrayal by apparently being intended primarily for laughs.  I also wonder if the gay community will have something to say about the way in which sexual orientation is presented, which is in a rather stereotypically humorous way.
I have admired Taraji P. Henson ever since I first saw her in television’s “Person of Interest”, in which she played a slightly dowdy but sharp witted and stubborn city cop.  Of course, she has gone on to much grander roles in, for instance, Hidden Figures and the TV series “Empire” and become more glamorous in her appearance.  She shows a wide range of skills here, from brash and unheeding to sexily fun-loving to thoughtful and penitent.  Other standouts in performance include Richard Roundtree playing a loving father who understands the shortcoming of his parenting efforts, Erykah Badu playing a wondrous eccentric psychic, Tracy Morgan playing a kind of crazy parent, and Aldis Hodge as a gorgeous hunk with values.

Light comedy is the order of the day here, along with a few life lessons.