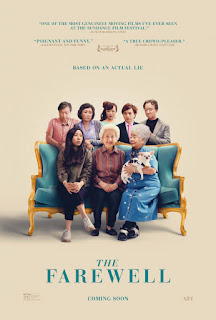 To tell or not to tell.  That is the question in this arguably groundbreaking film that juxtaposes American and Chinese points of view about illness and death.  It’s not weighty at all, but covers all ranges of emotions and personal quirks of the characters. I first heard the story on a 2016 This American Life podcast, and it stayed with me ever since.  My worries about the film not living up to the real story were quickly assuaged. In the hands of writer/director Lulu Wang, Farewell takes normal, everyday family life and transports it to an elegant and highly entertaining level, skillfully weaving through potential “edict-like” waters and throwing the question up to the viewers.
Billi (Awkwafina) is a Chinese-American who moved to the U.S. with her family when she was a toddler. She is now grown up, and wants to go back to China when the extended family is gathering for her cousin’s wedding, a major ruse concocted primarily to get everyone to gather after the beloved grandmother Nai Nai (Zhao) has been diagnosed with cancer, which everyone assumes is a death sentence.  But in China at that time, a diagnosis of cancer was hidden from the patient.  So that’s the set-up of the story:  The Chinese custom vs. the American way of discussing major illness frankly.  In this story it is only Billi who takes the American point of view, and she has been strictly forbidden by parents and other relatives to speak frankly to Nai Nai.  Even the Chinese doctor trained in the UK, whose policies are the same as Americans’, takes the Chinese approach.
At this point, the film entertains us with cover-ups all around within the family—which are left for you to experience first-hand, because they underlie the fun of Farewell, so spoilers should be withheld.  But there is more to the film than the humorous; it poses numerous facets of “truth” and “lies” that provoke thought, and it draws on emotions that I assume people around the world will recognize and re-experience.
The Farewell should be a testament to Lulu Wang’s creativity and ability to tell a story not easily forgotten, but as well to assemble the whole talented cast and crew to make a film that is likely to be on award nomination lists at the end of the year.  Along with Wang’s perceptive script, Alex Weston’s music elevates the action of the film, giving it even more eloquence by expressing in Eastern and Western modes universal emotions.  It is one soundtrack that is likely to be prized for its expressiveness. I attribute the priceless wedding pictures—and other good picture qualities—to cinematographer Anne Franquesa Solano.
Awkwafina has been a hit every since Crazy Rich Asians, and she captures a starkly different role here in being a different kind of “misfit.”  Here, she must show more emotional depth, uncertainty, and diffidence, which she pulls off with expert facility.  She deserves whatever nominations she may receive. Noteworthy as well is the delightful Shuzhen Zhao as Nai Nai.  Presumably, she is not a professional actress, but she steals the show on more than one occasion, eliciting our love for her as if we’re part of the family, and providing a strong draw toward the Chinese way of thinking.  Not to be discounted are all the other major players in this drama, such as Diana Lin and Tzi Ma as Billi’s parents.

A movie everyone across the world is likely to appreciate.

Posted by donnarcopeland at 5:47 AM