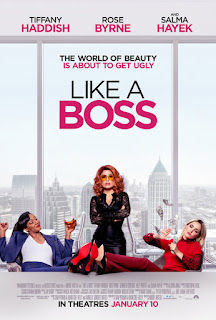 Give a few pretty good actors a mediocre script, and what do you get?  Of course, a bad movie.  Everything in this movie is predictable from start to finish.  The filmmakers took every stereotype of women they could think of and included it (e.g., bitchy, manipulative woman boss with an obsequious yes-man at her side, yammering friends, insipid topics of conversation, vindictiveness…you get it). The set-up is two friends since middle school are now roommates with their own beauty company called Mia & Mel.  One is hyper-responsible and timid; one is brash and always coming up with something new. Mia (Haddish) is the former, and Mel (Byrne) the latter.
With their business about to fail (hesitant Mel can’t bear to tell Mia about it), a company raider, Claire Luna (Hayek) swoops in with an offer Mel can’t refuse, despite Mia’s apprehensions about losing control of their own company.  They end up agreeing to the terms, but the script has them behaving like school girls avoiding the dishes; somehow, they can never come up with an assigned presentation, even at critical times. They squeak by a number of times, but essentially it goes back and forth between their being in, then out, with Claire.  The absurdities resolve into a completely vindictive conclusion.
It’s surprising that the director of Like a Boss, Michael Arteta, is the same one who directed Beatriz at Dinner, an innovative, charming, and insightful movie, with Salma Hayek as its sassy star.  What attracted Arteta and Hayek to this script?  I wonder.  The story is by Danielle Sanchez-Witzel, with a screenplay written by Adam Cole-Kelly and Sam Pitman.  The movie seems so much from the male perspective, I have to think the two screenwriters influenced it in that direction.
There are truly revolting images, such as the “pussy cake” (a cake in the form of a birthing baby’s head emerging from a vagina), an assistant telling Mia and Mel that “Claire will be with you when she wants to be with you”, and “Follow your juices.”  Over and over, the movie tries to push sexual references to the limit while still trying to be funny.
None of this material has any underlying meaning; it’s clearly for laughs in traditionally “forbidden” areas. Ironically, I think the hope was that it would make a strong statement about female friendship and loyalty, but the writers couldn’t seem to be able to come up with more than a stereotypical, “happy-ever-after” illustration of that or any subject of depth.


This is a superficial, stereotypical view of women and their relationships among themselves and with the larger world.