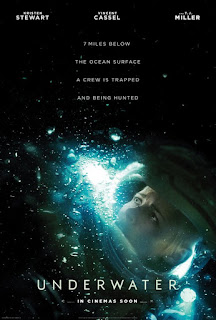 I could empathize with characters in this film being trapped underwater, with the creaking of the ship, periodic explosions, and rushing water blasting through the halls.  I felt the same way in the theater, being trapped in a movie where I couldn’t see much of what was happening, couldn’t hear what little dialog there was other than, “Can you see me?”  “Can you hear me?” “Are you OK?” and got sick of hearing underwater sounds and the creaking of the ship.  Major things, like death, occurs, but you might miss them altogether.  I can’t remember when I wanted to walk out of a movie more than I did at this screening.
The setting is a deep-sea drilling ship, with researchers on board.  We get a little glimpse of Kristen Stewart’s character, Norah, in the beginning, brushing her teeth (which has come to be a motif for filmmakers these days), and pondering about her life, including the thought that, “there’s a comfort to cynicism; there’s a lot less to lose.” These musings are interrupted by an earthquake, which sends ocean water flooding down the halls.  Hundreds of people are killed, but Norah barely escapes with one other member of the crew.  They manage to get to another part of the ship where the captain (Cassel) and two others have survived, but it’s clear the ship is sinking, and the captain decides they will don sea-diving gear and walk to the main station, hoping they have enough oxygen to last.
But the elements are not the only threat.  It seems there are huge sea monsters that have appeared, all too ready to toss them about like rag dolls.  The audience is petrified, waiting to see whether they’ll reach their destination.
The actors play their parts well, albeit on mostly one note:  panic, with little variation and without much dialog. Director William Eubank has chosen to make the picture very dark, so that it’s difficult to get a good look at the monsters.  Perhaps this was intended to make it even more scary?

Unless you’re into horror movies with little character development or dialog and a lot of creepy sounds, you’re not likely going to want to see this film.

Posted by donnarcopeland at 11:02 AM