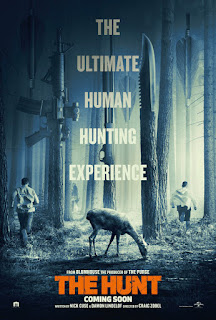 A perfect allegory for the times.  The Hunt is a 20thcentury take on George Orwell’s novel Animal Farm, in which the animals rebel against their masters.  Only in this rendition, it’s the “Elite Liberals” against “The Deplorables.”  Its plot is not a straightforward telling of a story.  It starts out with a group chat on the telephone, then goes backward and forward in time.  (So keep track of the names, even though it will still be confusing because identities are frequently shifting.)
Before (almost) everything becomes clear, we witness characters being restrained on a plane and later hunted with guns, arrows, and hand grenades in an open field or roadside station.  These are people from different parts of the country who have been kidnapped, anesthetized, and brought to…they don’t know what state they’re in.  They only hear references to “Manorgate” (parallel to Orwell’s “Manor Farm”), and two pigs wearing human clothes appear from time to time—clues for those familiar with Orwell’s work.)
That’s enough of the plot; it will be more entertaining and engrossing the less you know about it.
Writers Nick Cuse and Damon Lindelof are to be congratulated for their creativity in adapting a novel published in 1945 about Russia and the Soviet Union and cleverly making it relevant to our country today.  Director Craig Zobel expertly films their script, making it come alive in ways that are simultaneously entertaining and appalling.  I always have a problem with movies shifting back and forth in time, and in this film, it’s especially challenging when characters disappear and reappear, and identities often shift (e.g., it is not always clear whether a character is one of the good guys or the bad guys)—all of which contributes to its formulation as an intriguing intellectual puzzle.
Betty Gilpin exquisitely plays a somewhat mysterious figure who seems at first to be a deadpan young woman from Mississippi.  But she is a formidable fighter and always seems two steps ahead of whomever she meets.  Gilpin deserves a nomination for this role.  She easily carries the story as a lead figure.  Hilary Swank is perfectly cast in her role, although she is not present in most scenes.  Supporting cast is likewise a talented group of actors who move the story forward with ease.
My only criticisms are in too much shifting back and forth in time (a current fad in filmmakers’ trying to make their movie more exciting) and in the length of the final battle (as unbelievable as it is humorous).
This is one of those films that come along every so often to remind us of the artistic, intellectual talent at filmmakers’ disposal.  When you see a work like this, you wonder again why this talent is not tapped more often, and we are offered remakes and sequels ad nauseam.  Oh, yeah…once again, it’s all about the money.

Prepare to be entertained (likely) while being appalled (almost certainly) in this well-informed allegory reckoning back to George Orwell’s Animal Farm.