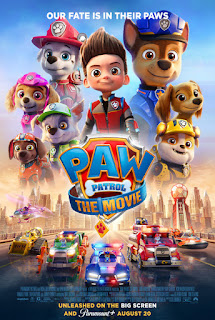 Kids are going to love this.  But adults are too, with the spoofs, clever writing, references to current world issues, and ingenious special effects.  Developed from a Canadian computer-animated television series in 2013, writers Billy Frolick, Cal Brunker, and Bob Barlen adapted it into this movie, directed by Andrew Hickson and Cal Brunker.

The Paw Patrol, headed by Ryder (Will Brisbin), is able to step in and rescue the citizens of Adventure City when their corrupt newly “elected” mayor (Ron Pardo) creates one disaster after another.  Mayor Humdinger (an apt name) displays his narcissism and hyperbole in usurping control over the weather, a fireworks display, jailing all dogs in the city (he favors cats, which hover around him), making the subway system a flawed looped ride, and finally, building “the tallest” building in the city.

Writers have cleverly worked in current issues of today—corrupted politics, climate change, news media, diversity—even PTSD and conflict resolution modes.  I am truly awed by the way the filmmakers have woven together such important subjects within a completely entertaining movie for children.  This is one of the few films I’ve seen that are so successful in weaving together such disparate but important topics within an animated movie for children.

Tyler Perry has a small role in the beginning when he is rescued by the Paw Patrol   and “to the rescue” Chase (Armitage), after his huge truck gets suspended on a bridge.  He has absolutely no confidence in such a team rescuing him, but after their success, he has a new respect for the team, and the movie proceeds with the derring-do of the Paw Patrol.

Music by Heitor Pereira and animation by Mikros—along with all technicians involved and the primary showrunners and actors—make this a must-see movie.

A rare find:  A movie for children and adults that provides pleasures for both groups.

Posted by donnarcopeland at 4:13 PM