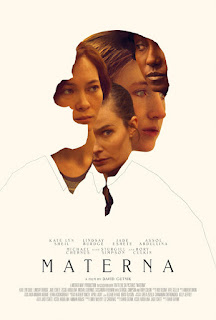 This impressionistic picture showing slices of reality for four women will prompt conversations to have with other viewers later rather than providing any closure.  A clue as to what the filmmakers had in mind may be in the opening scenes in which Jean (Sheil) is hooked up to a virtual reality machine, and announces, “Something’s not right.  Some kind of bug.  Let’s explore it…I was watching this thing happening to me and I couldn’t do anything about it.”

We see that Jean lives alone (presumably during the pandemic when she is working at home), is heavily involved in what she is doing—perhaps some kind of experimental virtual reality program.  She is interrupted periodicall by brief conversations on the phone with her mother who desperately wants her to get married and have children.  Or at least preserve her eggs.  Obviously, grandchildren are uppermost in the mother’s mind.

The next slice is provided by Mona (Eshete), a black woman who is an actress (and writer perhaps) whose television show has just been cancelled, and her mother’s solution is for her to return to her previous occupation as a minister in a Jehovah’s Witness Church.

The next is Ruth (Burdge), a well-to-do politically conservative woman with a son who is being bullied at school and a brother at the opposite end of the political spectrum who is gay.  They have a volatile dinner together one evening, and she is clearly left to her own devices.

The final vignette involves Peri (Abullina) who is from Kazakhstan and returning home after a visit to the home country following the death of a favorite uncle.  It takes a while for her to get significant information about the death from her mother and grandmother.

These women are all separated from one another by race, culture, politics, religion, and class, yet all have three things in common:  They are all in pain.  They have conflicts with their mothers.  And they were all on the same subway car when a loudmouth man makes everyone aware that he is impatient for the train to move along—says he has an important meeting--although he says he has no job.

Perhaps the filmmakers, while showing that all these women have legitimate pains and frustration, want to point out that there are men losing so much of what is important to them—jobs and core identity—which women are unaware of and unaware of its implications.  That is, men and women live in separate universes.

And is it saying that the definition of ‘maternal’ is changing, that women are being called upon to be more than mothers in the previous sense of the word?  One grandmother says to her daughter about her granddaughter, “Listen to her; she can do anything.”  That is, the charge made to all mothers in the contemporary world—that in addition to being mothers, they need to support their families in every sense of the word—emotional, economical, and moral.  It is up to them.

The ultimate meaning of the film is not easy to discern, and that means to me the filmmakers are attempting to prompt the audience to think more seriously about the role/roles being expected of women in contemporary times.

Are women of today facing a burden unlike those who have come before?

Posted by donnarcopeland at 12:39 PM