FANTASTIC BEASTS: THE SECRETS OF DUMBLEDORE 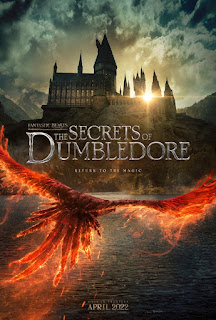 This umpteenth version of the Fantastic Beasts series begins on a rather sinister note with Albus Dumbledore (Law) and Gellert Grindelwald (Mikkelsen) meeting for tea and revealing their significant history.  However, during the brief meeting they have major differences that will reverberate throughout the world of magic.  Dumbledore explains to Newt (Redmayne), Theseus (Turner), and Jacob Kowalski (Fogler) that they must exert their powers in thwarting Grindelwald’s plans for wizarding world domination.

Mikkelsen is made up to bear a resemblance to Hitler and shows him rallying the people around him in ways reminiscent of the German Nazi of WWII.  Grindelwald has become power hungry and knows that Dumbledore will do everything he can to stand in his way, so he sends out resentful outcast Credence Dumbledore (Miller) to kill the older Dumbledore.

Most of the story is about these two factions trying to out-maneuver one another.  Unfortunately, there are few surprises (if any) in this production, and although there are a few pearls of wisdom cast (“Do what is right; not what is easy” and “Trying to make things right is more important than perfection”), real substance in terms of ethical and moral values is missing.

The production is visually beautiful, and it is always fun to see magical powers rendered in CGI (the two major protagonists fight a brilliant battle with one another), but this plot is so thin and lacking any punch, the viewer is likely to question its 2+-hour length.

Eddie Redmayne, Jude Law, Mads Mikkelsen, and the rest of the supporting cast are skilled actors who are consistent in their performances.  Music by James Newton Howard and cinematography by George Richmond contribute to the entertainment value.  It seems that the script (J.K. Rowling, Steve Kloves) is the main drawback, although it’s also likely that the filmmakers have simply extended the series too long.

This latest production in the Fantastic Beasts series adds nothing new, especially given the length.

Posted by donnarcopeland at 2:05 PM