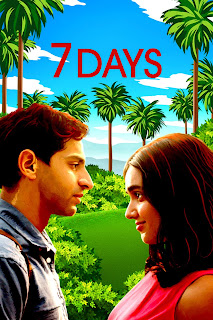 This production executive produced by the Duplass brothers and Roshan Sethi (the latter also the director) and written by Sethi and the star Karan Soni seemed to have promise but turns out to be less interesting than expected.  I realize that I was anticipating something like The Big Sick (starring Kumal Nanjani and Zoe Kazan), a rom-com written by the two stars that speaks across cultures.

The idea of making a movie about matchmaking that is prodded by Indian born parents in today’s age would be a challenge for sure.  Setting the film during the recent and ongoing pandemic is likewise intriguing.  But whereas the acting in 7 Days by Karan Soni (as Ravi)  and Geraldine Viswanathan (as Rita) is really fine, the script is not so much.  Pitching a naïve, compulsive, over-achieving mama’s boy against an impulsive out-of-work, impish woman could be funny, I suppose, but their situation becomes so unlikely it strains credulity.

I admit I did laugh out loud a few times (guess-who jokes through a locked door), but most of the time this couple spends together is not entertaining or even interesting.  I ended up having no sympathy at all for the Rita character and only a little for Karan who is such a neurotic wimp I lost respect for him, although at least his heart was in the right place.  That these two people who are so different from one another could end up together in a marriage is completely incomprehensible to me.

I presume that 7 Days will be of interest to people whose values are still with the “old country”, but it’s doubtful many young people of today will find it something they want to watch.

Matchmaking by parents in a time of covid should be comedic, but in this case, it is not.

Posted by donnarcopeland at 10:01 AM