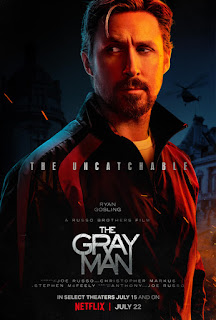 How to get the attending audience not to see your movie.  Make scenes so dark viewers can’t tell what’s going on or who the characters are, especially in the fight scenes.  Make it so loud that dialog can’t be heard above the din of sound effects.  Include characters that are so sadistic it’s unbearable to watch (e.g., pulling out fingernails one by one) and forces you to look away.  Write the plot so it contains implausible situations, such as the wounded continuing to fight long after they would most likely have succumbed, have a character with a heart condition be terrified time and again without having a heart attack.  And finally, mixing up the time frames by going backward and forward.

The CIA must be grumbling about how it’s portrayed in The Gray Man (largely written, directed, and produced by Russo brothers Anthony and Joe), showing two leaders in the upper echelons of the CIA who are completely illegal and immoral.  Movies are notorious among professionals for portraying their disciplines unrealistically, and (at least I hope) this is another instance.  Of course, we know of real situations where the CIA used bad judgment, but I hate to see even those instances glorified in media.

The star of this production is one of my favorites, Ryan Gosling, as an unfairly discredited agent being recruited to perform special jobs that are top-secret by their nature of bordering on the illegal.  Six, as he is called, does not even have a file.  Gosling is up to his usual fine performance of being extraordinarily gifted/trained in combat, and still gentle with a heart of gold.  Chris Evans is good as well as a fiendish, sadistic evil man, and it’s hard for me to believe that “Captain America” would take on such a role, but he is believably bad here.  Ana de Armas likewise plays a strong role demonstrating her fighting skills against much stronger men.  She is certainly convincing as a very bold driver.

On the whole, the cast and its skills are the best feature of this production that looks and feels like a video game, more intent on the craft of special effects than the art of story and character.  The Russo brothers have become famous perhaps primarily for their success in the Marvel world of film, which I have enjoyed from time to time.  Here, I think they go over the top in so many ways, with no recognizable artistry.  The craft as they see it takes over the film.  The erratic editing simply provides more evidence of the film’s lack.

I can’t think of any reason anyone would want to see this film.

Posted by donnarcopeland at 2:56 PM