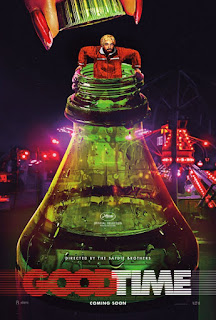 Robert Pattinson as Constantine “Connie” Nikas is the reason to see Good Time.  His performance as a poor-planning low-level crook is fascinating to watch.  This character is a great improviser, and although his (usually poor) planning doesn’t work out, he’s always got another trick up his sleeve and smooth talking to get what he wants.  He’s got enough smarts to dream up schemes—even on the spur of the moment—but not enough to work out a solid plan of execution.
A major flaw in the script is related to the basic premise, which is, that Connie feels a great deal of responsibility for his brother Nick (Safdie), who is mentally challenged.  But the story never fills in just why Connie feels such possessiveness toward him.  He consistently tries to “rescue” Nick, but does it in ways that are unhelpful at best and dangerous at worst.  The “why” would be a much more interesting story to me, rather than watching mistake after mistake by Connie, ostensibly to rescue Nick.  Nick would be fine without him; society at its best—as it appears in this film—will take care of him responsibly.  Although, I must say that it could be that the filmmakers are making fun of psychological help in some, particularly the last one.
Connie starts off making a mistake by having Nick be an accomplice in a bank robbery.  Nick clearly doesn’t have the wits needed to evade the police and gets arrested.  The authorities can see that he is not really responsible and provides him with help while they pursue his brother, who is scrambling to make bail for Nick.  (The bank has been clever with handing over the money, which is no longer usable.)
What follows is a bizarre sequence of events involving an inept attempt to spring Nick from a hospital, an encounter with a grandmother and her granddaughter who will be duped, an attempt to rob an amusement park, and so on.  You’ve got the picture.  Desperation results in more and more schemes and bumbling.  The self-centeredness of Connie is illustrated in one sentence:  “Don’t be confused; it’s just going to make it worse for me.”  Said to a 16 year-old girl.
The purpose of Good Time escapes me.  It has potential to be comedic, but only a few scenes are made laughable.  It could be about heists that go wrong, but there is nothing really clever about these heists.  It could be a drama about a dysfunctional family, but it is colorless in this respect.  The only redeeming value seems to be that justice is finally served for both Nick and Connie in the end.

Good time is not a good time at all.

Posted by donnarcopeland at 9:43 AM