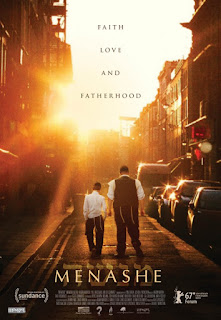 Menashe (Lustig), a Hasidic Jew, has recently lost his wife after an illness, and his only consolation is his 10 year-old son Rieven (Niborski).  But in their religion, Rieven can’t live with his father until his father is married again; children must live in a two-parent home.  Menashe’s brother-in-law, Fischel (Weisshaus), takes Rieven into his home, where Rieven is happy enough, but he really wants to live with his father.  And Menashe desperately wants him.  There are a couple roadblocks to this arrangement.  One is the Talmudic rule about where children live, and the Rabbi (Schwartz) is strictly adhering to it.  The other is that Menashe is still like a grown kid, making mistakes and being irresponsible at almost every turn.  In other respects, he is a good father, playing with his son, teaching him principles, and so on.
The big question of the film is whether or not Menashe will manage to get a wife and carry out his responsibilities maturely.
It was important to Director Joshua Z. Weinstein that the film would be shot in Brooklyn in an Orthodox Jewish neighborhood with locals serving as actors for authenticity.  The story is loosely based on Lustig’s life; however, he denies that he was as much a Schlimazel (chronically unlucky one).  Although he is referred to as that in the film, I regarded most of the upsets as his own fault (e.g., oversleeping and making his son late for school, not packing supplies well enough in the van and not securing the door, resulting in boxes being thrown out on the street and their contents being destroyed).
Menashe is intended to acquaint non-Jews with the Hasidic life and beliefs, something like a cultural lesson.   This is Weinstein’s first feature film after directing a number of documentaries and working in other capacities of filmmaking.  The story, which he helped write, moves at a good pace and keeps the viewer engaged, if one is interested in the subject.  The actors are noteworthy in the quality of their work, especially given that they are not professional actors.
The film will probably be more appealing to those who hold religious beliefs (of any kind) than to those who do not belong to an organized religion.  I, for one, have trouble with such rules as a widower being required to have a wife before his child can live with him, and of course, I wonder if the rule applies to women as well.  Menashe had less appeal to me in that my interest in religious beliefs is not strong.

A rather hapless Hassidic widower tries to adhere to Talmudic law in order to bring up his own son.

Posted by donnarcopeland at 9:27 AM