THE TRIP TO SPAIN 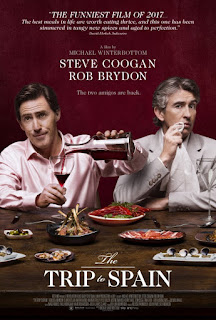 Much like The Trip (2010) and The Trip to Italy (2014), Steve Coogan and Rob Brydon do their guy touring thing, this time in Spain, with (mostly) witty repartee, petty bickering, and comedic miming of celebrities while dining in exquisite restaurants and motoring through spectacular scenery.  Thanks to cinematographer James Clarke, we get a “you are there” experience, depending on the power of our imagination.
This is more than a travelogue, though, in that the actors and director Michael Winterbottom have seen to it that both emotionally substantive and truly funny scenes are a part of it.  No “writer” is listed, implying that much of the dialog is improvisational. The story touches on professional rivalry and the need for self-advocacy (or sometimes, simply luck), ruminations and banter about aging, the ever-present real-life situations that impact the trip, and genuine heartbreaks and disappointments.
The audience I was with in the screening was ideally responsive, and applauded at the end.  I enjoyed it almost as much, but tired a bit of the impersonation sequences.  There were a lot:  Mick Jagger, Michael Caine, John Hirt, Marlon Brando, Robert DeNiro, Woody Allen, Errol Flynn, Sean Connery, and more…and a Bach-Swingle-Singers-like rendition of Herb Alpert’s Band.  Coogan and Brydon compete and argue about who does a better job of imitating.
Although I did like the Herb Alpert tune, I found more entertaining than the impersonations the sequences where one or the other would assume the role of the expert scientist-historian, showing off their knowledge of the disciplines.  It was surprising to me that a line I found laugh-out-loud funny (“Time flies like an arrow; fruit flies like a banana”), is actually an illustration used by linguists “as an example of a garden path sentence or syntactic ambiguity, and in word play as an example of punning, double entendre, and antanaclasis” (Wikipedia).  Kudos to whoever knew that term and inserted it.  Another funny sequence is when the producers of Steve’s and Rob’s show dress them up and have them pose as Don Quixote and Sancho Panza.  Their irritation and discomfort made the scene.
The ending sequences are rather tender and surprising in their quality of “life goes on…”

A travelogue to Spain with humor, exquisite meals, spectacular road trips, and the preoccupations of 50+ year-old men.

Posted by donnarcopeland at 9:34 AM