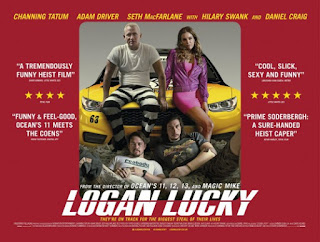 Crime capers are always fun when they’re cleverly worked out, smack of basic human truths, and have colorful characters.  Steven Soderburgh’s Logan Lucky is just such a film, keeping you guessing and chuckling throughout.  He is clearly the director, cinematographer, and editor, but the first-time writer named Rebecca Blunt is a mystery about whom Soderburgh’s lips are sealed.  But it doesn’t really matter, because the film is so playful, warmly human, and so well executed from the writing to the production, we don’t really care.
In Charlotte, North Carolina, the Logan family has the reputation for being cursed, what with so many things happening to them through the years.  Jimmy Logan is having an especially hard time these days with a football promise coming to nothing, a failed marriage, loss of his job, a bum leg, and he can’t even pay his phone bill.  His brother Clyde seems to be doing reasonably well in his bar, even with part of his arm and hand missing because of a war injury.  They have a sister, Mellie (Keogh), who seems to be able to assist and manage any storm.
Jimmy is desperate.  His ex-wife (Holmes) is getting ready to move out of town with her husband, taking his cherished daughter Sadie (Mackenzie) with her.  (Sadie is an amusing insertion into the story with her knowledge of tools to hand to her car mechanic daddy and her penchant for all things girly like fashion shows and the “culinary arts.”)
What follows is Jimmy’s intricate plan to siphon off some of the Charlotte Motor Speedway’s  questionable betting practices, pulling in his brother Clyde (Driver), his sister Mellie (Keogh), prisoner Joe Bang (dynamite expert) (Craig) and Bang’s two brothers (Gleeson and Quaid), and other inmates.  To make matters even more entertaining and clever, some people are used unwittingly (but never exploited without compensation).  That is, no one is really harmed in this caper, making the crime go down as all part of the fun.
The main characters are all warmly sympathetic—despite the film’s making fun of them in a loving way, absent of cruelty.  The actors should be congratulated on their southern accents, even British Daniel Craig.  The plot is set up to get back at “The Man”, which has a satisfying effect on the viewer and works to excuse the crime.  It roasts common defenses, such as firing a person for “liability issues”, a prison warden (Yoakam) swearing that X (fires, riots, escapes) “just does not happen here”, and a racetrack administrator claiming ignorance about an insurance claim.  I got a kick out of the last scenes showing pairs of characters getting together sometime later after the mysterious disappearance of a considerable amount of money.
Channing Tatum is a star in evincing a character who is simple on the outside but enormously complex and intelligent on the inside.  Adam Driver is well versed in playing so many different types, and he comes across believably here as a younger brother looking up to his older sibling and really wanting to please everyone.  The actor Daniel Craig is almost unrecognizable as the bleached-blonde, hair-cropped felon he is.  I appreciated seeing the character of Sadie (Mackenzie) presented as a many-sided girl with diversified interests exploring the world.
I’m glad Soderburgh is back after a “retirement” from movie making.  He has a way of producing engaging films that have a social message, without detracting from their entertainment value.
Hee-haw heroes put one over on the powers that be:  a crime caper that’s an entertaining romp.


Posted by donnarcopeland at 8:57 AM