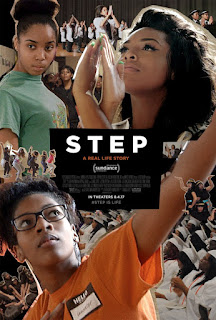 “Stepping” or step-dancing is one in which the dancer’s body is used like an instrument to make complex sounds and rhythms with footsteps, spoken words, and clapping.  This award-winning documentary by Amanda Lipitz was filmed at the Baltimore Leadership School for Young Women (BLSYW), a charter school founded by Lipitz’s mother, Brenda Brown Rever, for girls in middle and high school.  It focuses on leadership, college preparation, strong academics, and best practices for girls, with the motto, “Transform Baltimore one young woman at a time.”  Once, when Lipitz was visiting the school, the girls, knowing she was a filmmaker and Broadway producer, begged her to bring her camera and film them step-dancing.  Subsequently, she was asked to make a short film to raise money for the school.  She decided to make it about the Step Team, and focus on the lives of three of the students.  In 2017, the film was shown at the Sundance Film Festival and won a special jury prize for inspirational filmmaking, with Lipitz being nominated for a grand jury prize for directing.
The theme of this truly inspirational film could be “It’s never too late to change.”  As the film follows the team, focusing on the lives of three of its dancers, the challenges they can face becomes very clear, including poverty, unstable family life, distractions, and consistent motivation to persist and succeed.  Many students have no models to go by, and that is where the teachers, counselors, and principal play key roles.  They have to love their jobs and these girls to give what it requires.
The Lethal Ladies of BLSYW are working toward competing at the step competition in Bowie, where they’ve tried three times before, but never received a prize.  Teacher Gari McIntyre, Counselor Paula Dofat, and Principal Hall with their colleagues knock themselves out, pressing the girls to keep up their academics, come to practice, work as a team, and think positive.  They will do the same when it is time to apply to colleges.
We see Blessin, a strikingly beautiful, charismatic teen and co-founder of the step team having more trouble than most.  Her interest in academics, and even the team, waxes and wanes.  Her mother is someone she resembles in temperament, but is not always a good role model for her.  Tayla, on the other hand, also comes from poverty, but has a mother who takes a fierce interest in her daughter and is proud of her achievement in becoming a correctional officer.  Tayla is quieter than most, but consistently makes good grades.  Cori is another dedicated student whose stepfather lost his job, putting the family’s finances in peril.
All these accounts document the importance of an organization for teens where they can get inspiration and motivation; but it underscores as well the critical need for school officials (teachers, counselors, principals) to supplement the emotional and achievement support they get from the activity with real interest and strategic guidance.  My hope is that the film will be an inspiration for girls in high school, as well as school officials who are in a position to establish similar endeavors in their own schools.
In addition to its serious purpose, STEP is entertaining for the viewer in getting to know the girls and in learning about step dancing.  It’s exciting to see them compete in the Bowie State Step competition, an unpredictable process, that is touch-and-go at times, and uncertain as to whether the team can all pull together and make it there.
Director Lipitz is skilled in drawing the audience into the girls’ lives and their stories that pull for just the right degree of sympathy and understanding of the circumstances they and their families face every day.  Music by Laura Karpman and Raphael Saadiq is energetic, tuneful, and soulful, while cinematographer Casey Regan’s camera guides us in watching the dancers and alternating with intimate portraits of the players’ lives, including the girls, their parents, and their teachers, counselors, and principal.

Take a spirited, soulful journey into the world of step dancing, its promoters, and its beneficiaries.