A WRINKLE IN TIME 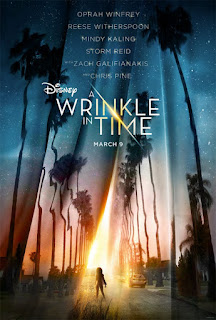 This is a fabulous production through and through.  Based on a novel of the same name by Madeleine L’Engle, it packs an emotional punch in following the arc of transformation in an embittered girl trying to cope with perceived abandonment and possible death of her father.  She has cut herself off from friends, allowed her performance at school to slump, and of course then becomes the butt of cruel barbs from classmates.  Her self-esteem has bottomed out, and it seems as if no one can help her.
But something miraculous happens that reunites her with her father’s dream and prods her to begin a painful, terrifying journey of self-discovery and acceptance.  This is where film comes into its own in telling a wondrous story, and the filmmakers responsible for cinematography, art and production design and visual and special effects create the magic for us to go on that journey with her.  It will be beautiful, but terrifying and emotional and exciting as well, as we travel through warped space and time.  An end goal of a search to find someone actually becomes a rescue mission (of more than one person).
Three supernatural beings make their appearance in Meg’s (Reid) life in the forms of the three Mrs.:  Mrs. Whatsit (Witherspoon), Mrs. Who (Kaling), and Mrs. Which (Winfrey).  They are other-worldly, but present themselves as “warriors who serve the good and right in the universe.”  Whatsit is more human-like in her playfulness and in making errors in communication, and she represents the annoyance of Meg’s mother, her school principal, and friends who get exasperated with Meg.  Who talks in quotes from famous writers to get her points across, and represents intellectual curiosity and and warmth—which is a nice combination.  Which is a guiding force that seems best equipped to get through Meg’s defenses and guide her to a more realistic picture of herself, emphasizing the fundamental importance of faith in oneself and allies sticking together.
The fantasy has a way of reminding us of current events with some of its principles, such as fear leads to rage, which leads to violence, which leads to darkness.  It has a message about the value of individuals’ being a source of light in dark times.
The positive messages in A Wrinkle in Time make it more than just a thrill and fantasy; it has substance as well with respect to truthfulness (including to oneself), frankness (expressing thoughts/feeling that need to come out), and self-acceptance (including owning and accepting our faults.  We get to see all the main characters profit from their experiences and introspection.
Ava DuVernay can be so proud of her accomplishments in film; it’s mind-blowing to think about how she has ranged from Selma to A Wrinkle in Time, two vastly different genres and movie making.  The three “Mrs.’s” are entertaining and extremely helpful to Meg in their insight and encouragement.  Meg has two other fine supports on the journey; her brother (Deric McCabe) and friend Calvin (Levi Miller).  Her parents (Pine and Mbitha-Raw), both scientists, come across as realistic and loving but with flaws.  Their mixed-race family is inspiring in its inclusiveness; although I have to admit that I was a bit turned off by the “preciousness” of the opening scenes showing the family as more idealistic than real.
A Wrinkle in Time has some very frightening scenes, so a caution to parents with sensitive children.  They will want to make sure to wait until their child is older, but above all be prepared to discuss the movie afterwards with their children, regardless.  As an adult, those scenes were thrilling to me, and add much to the quality of the film, so I’m glad they were left in.

A marvelous fantasy based on a beloved book with outstanding visual and special effects and powerful messages for all kinds of children.

Posted by donnarcopeland at 2:19 PM