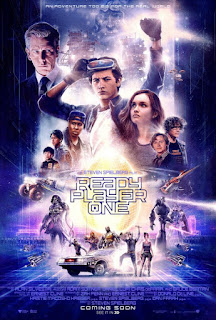 Are you ready for the world of 2045?  Steven Spielberg’s vision is that everyone will be so absorbed in virtual reality (VR) games they’ll be spending most of their time there, rather than in the work-a-day real world.  We get a striking picture of how that will be by watching Ready Player One.  Unfortunately (for me), most of the action is like a video game with car chases, fights, and wars.  But there is a story underlying all the racing around, plotting, and attempts to figure out a master gamer’s clues leading to a lot of money and ownership of the Oasis, the ultimate gaming organization of the time.
Humble Wade Waits (Sheridan) lives in the “Stacks”, a slum in Columbus, Ohio, consisting of house trailers (rather then apartments or condos) stacked upon one another (a visual masterpiece reminding of the favelas up a mountainside above Rio de Janeiro, Brazil), and right away we get to watch him traverse down to the street level by jumping, leaping over balconies, and sliding down a rope.  Wade’s parents died, and he lives with his sister Alice (Susan Lynch) and her current boyfriend, an abusing lout.
Now, Wade has an avatar, Parzival, and he is hell-bent on solving the riddles left by the mischievous creator and owner of Oasis, Halliday (Rylance), who—by the way—has died.  But whoever solves his riddles for three keys will become rich and gain the power of ownership of Oasis.
Parzival manages to develop a kinship with other avatars, and they form a party of five:  Wade/Parvizal, Samantha/Art3mis (Cooke), Aech/Helen (Aech), Sho (Zhao), and Daito (Morisaki), working together to find the keys; but they are thwarted by the unsavory giant corporation led by Sorrento (Mendelsohn) and his minions, foremost of which are I-ROk (Miller) and F’Nale Zandor (John-Kamen).
A matching of wits and devices follows, with the occasional appearance of Halliday/Anorak making the keys available as they are won.  Sorrento has developed a corrupt organization that is determined to out-smart anyone else in vying for the keys by hook or by crook—mostly crook.  The scenes switch back and forth between the virtual reality and real worlds, which becomes frightening when you realize that what happens in VR can affect people and events in the real world.
The story is engaging, acted out so well by the two leads, Sheridan and Cooke.  It was rewarding to see them as a real team, with one and then the other taking on a critical role in saving each other.  Usually, it’s Art3mis who is the quick wit figuring out the clues after Parzival’s initial win.  It’s nice to see the breaking of stereotypes in this and in their personalities, with the Cooke character being sharp and canny, and the Sheridan character being more naïve, but still solid in values and character.  Ben Mendelsohn is perfect as the charming, conniving villain Sorrento.  Other noteworthy performances were rendered by Lena Waithe, T.J. Miller, Hannah John-Kamen, Philip Zhao, Win Morisaki, and Simon Pegg.
This is fairly typical Spielberg with impressive production, substantive story, and well-defined characters.  It’s fascinating (and humorous) as well in its multiple references to other films (not necessarily Spielberg’s), and it does a good job in having appeal for both younger (technology, videogames) and older audiences (references to other films).  Janusz Kaminski’s cinematography, Alan Silvestri’s music, and Adam Stockhausen’s production design make this a first-rate production.
As much as I loved watching this film, it is primarily aimed toward fantasy enthusiasts who will revel in the special effects and references to previous iconic films.

Catch a futuristic ride into the world of virtual reality where “you can be anything you want to be.”