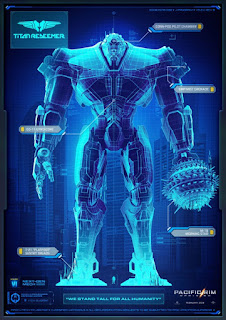 At first, I thought that the only reason to watch this film is for the special effects, which are spectacular, but I wished for more dramatic impact, which is so minimal.  Then later, I was intrigued with its treatment of the Amara Namani (Spaeny) character, a young sassy girl who had done amazing things on her own (such as assembling a Jaeger from scraps), failed at first at cadet school, then managed to become a central element in saving the earth.  That redeemed this film to some extent in terms of dramatic import and being more than the usual fight-game.
Another interesting twist is one of the characters’ going rogue after some of his vital fluids got mixed with that of a Kaiju in the first Pacific Rim film, making him eventually a traitor to the Pan Pacific Defense Force.
In Pacific Rim Uprising, several story lines play out.  There is the one about Jake (Boyega) trying to live up to his father’s heroic brilliance, his competitiveness with his fellow pilot, Nate (Eastwood), his argumentative relationship with Amara, and the competition among scientists (Gorman, Arjona, Day) to produce the most effective force, drones versus Jaegers.  If these stories had been fleshed out and the incessant, senseless robot fighting reduced, this would have been a lot better film.
To complicate matters, the music and sound effects often drown out dialog, and some subtitles flash by so quickly they’re missed.
John Boyega, the recipient of a number of rising star awards for his work in Star Wars:  The Force Awakens and Attack the Block, is good in the starring role, which is very similar to his past roles, so it was not much of a stretch.  The new up-and-coming star here is Cailee Spaeny in her first feature film.  She is a natural in her range of expressions and her ability to capture the spotlight.  Tian Jing as head of the Chinese Shao Corporation’s drone project is icily attractive and clearly shows command of those under her purview.  Eastwood playing rival to Boyega’s character is very effective, although his resemblance to his father both in appearance and mannerism is a bit distracting.  (Not his fault, of course.)  I missed not seeing more of Rinko Kikuchi, who had a major role in the first Pacific Rim; her role here is minor.
This is a film for special effects fans who are less interested in drama and more enthusiastic about seeing robots engaged in physical combat.

Meager in story; incessant in fighting.