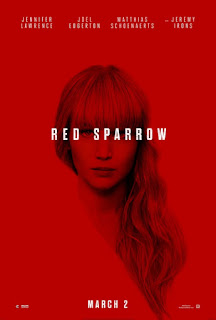 A spy story can be a perfect thriller, especially when double-dealing is a part of it.  Red Sparrow refers to a Russian intelligence operation that trained young recruits how to extract information from targets by engaging them, giving them what they want, and gradually building trust.
The problem here is that young Dominika (Lawrence) a Bolshoi ballet dancer, has her career abruptly curtailed when her leg is injured permanently.  Dominika is desperate now, because the Boishoi pays for her rent and her mother’s medical care.  Forthwith, her Uncle Vanya (Schoenaerts) offers her a role in the Russian state security, where he has a high position.  “There are no accidents”, he declares ominously, making you wonder how Dominika’s leg injury came about.  He is frank about the kind of commitment it will take on her part, and reminds her that she doesn’t really have other prospects for taking care of herself and her mother.
Vanya initially gives her a cryptic assignment, where she does very well; however, there is another agenda of which she is unaware.  She is very successful until…  Now, she has witnessed something that makes her dangerous, which gives Vanya additional leverage, which he uses by having her enroll in a special training program on the psychological manipulation of others.  Here, she is advised on principles such as to “forget sentimental morality”, given instruction about guns and shooting, and picking locks.  “Innure yourself to what you find repellant.”  “Learn to love on command.” Basically, the ends justify whatever means they need to use.
This is a time when the Cold War between the U.S. and Russia is still continuing.  On the American side, one of its CIA agents makes an error in judgment, and is sent home from Moscow.  Nash (Edgerton) is a dedicated operative who has spent years cultivating a source.  His burning desire to get back in the field is to hold onto this source, who won’t talk to anyone else.
One of the delightful intrigues in this film is to see how each side has more than an inkling as to what the other side is doing.  This means, of course, that Dominika and Nash will cross paths.  But I won’t give any spoilers as to how and how many times this comes about, but it is one of the most entertaining aspects of the film.
Francis Lawrence has directed the Red Sparrow in an optimal way for this type of film, in which the viewer is challenged to figure out what is going on at every step, even to the ending of the story.  I think the standout actor is Schoenaerts, who has an uncanny resemblance to Vladimir Putin, which is enhanced by the actor’s skill in portraying Putin’s mannerisms and persuasive ways of reasoning.  He can be truly intimidating and terrifying.  Jennifer Lawrence and Joel Edgerton are skilled actors who always bring their characters to life, but in this instance, charisma between the two was slightly amiss.  Of course, Charlotte Rampling as the “Matron” is intimidating and precise in her dispassionate “teach by the book” approach to training in unorthodox(?) techniques.  Additional supporting actors who enhance the quality of the film include Jeremy Irons and Ciarán Hinds as Russian security agents, Joely Richardson as Dominika’s mother, and Mary-Louise Parker as an informer.
This is a spy story that will not disappoint.  I have an objection to the level of violence and torture portrayed (from which everyone seems to recover miraculously), and wish that filmmakers would see that it is not really necessary.

A spy’s creed:  “Everyone is a puzzle of need.  Give him what he wants, and he will be yours.”