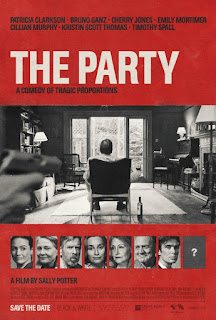 This is a British comedy, probably not to American tastes, that presents as a staged theatre production in black and white film.  It starts as a drama among a group of intelligent academic types, and quickly transforms into a satirical comedy.  Janet (Thomas) is celebrating a political victory with a party in her home with close friends after she wins the position of shadow health minister.  With the support of her friends, she has aspirations eventually for party leadership and even prime minister.  Her husband Bill (Spall), a professor, seems a bit out of it, sitting in his rocking chair and drinking wine, until their friends April (Clarkson) and Gottfried (Ganz) arrive and he spends most of the rest of the time talking and drinking with Gottfried.  April is rather cynical, and satisfyingly reports that she and Gottfried are separated.  Gottfried is a “healer” of some kind who always takes an optimistic view of whatever is confronting him; hence his and April’s conflicts.  She constantly puts him down, but he never seems to notice.
Janet is in the kitchen preparing canapes, while periodically taking calls from an apparent lover, when financier Tom (Murphy) arrives, looking very agitated, disappearing into the bathroom repeatedly, and conflicted about a gun he is carrying/hiding.  The other two guests at the party are Lesbians, Martha (Jones) and Jinny (Mortimer), who announce they are having triplets.  Jinny is the pregnant one, and she also has to disappear into the bathroom now and then, where she runs into Tom.
The “fun” comes when crises erupt and secrets emerge, which seem to be related to all their relationships.  It turns out that the group is enmeshed with a colorful history that is impinging on their current lives.  As the secrets unfold, we see the reactions of each, and in the process are greatly entertained by their all-too-human reactions and solutions.
The Party does not contain profound observations, but it has sharp-witted conversation and striking characters played by top-tier actors.

Sit and enjoy the banter and barbs of long-time friends gathering for a celebration, which gets completely lost in the revelations of so many secrets.