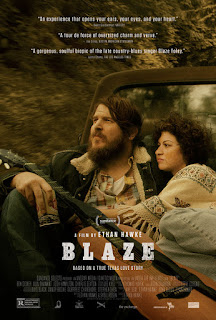 Blaze is an unusual biopic about a singer/songwriter who was almost famous in ‘70s-‘80s country music.  His idols were Hank Williams, Red Foley, and John Prine, and they were the inspiration for many of his songs.  He rubbed shoulders with other well-known musicians such as Townes van Zant, played in the film by Charlie Sexton, and apparently paved the way for the well-known country music stars Merle Haggard and Willie Nelson.
The film is in the form of an Impressionist painting, in that it doesn’t flow in chronological order, but gives the flavor of Blaze’s life by showing scenes when he is performing, hobnobbing about with buddies, or—the most interesting—when he interacts with the woman who became his wife, Sybil (Shawkat). Sybil wrote the memoir on which the movie is based, worked closely with Director Ethan Hawke, and she was on site during filming.  One of her unique contributions was to suggest a scene in which Blaze and his friends howl at the full moon.  During an appearance in Houston, Texas, Hawke said he was reluctant at first to include it, but finally relented, and it is, indeed, in the final cut.
Sybil and Blaze were attracted to each other right away, and lived a few blissful years in what they called a “tree-house” in the woods near Atlanta.  As it was provided rent-free from a benefactor, it was perfect for a young musician and a writer just trying to make their way.  Sybil, a spunky Jewish woman decides after a time that Blaze is ready for something bigger, and they move to Austin, Texas, in hopes of his being recognized.  That is where the story turns dark, as Blaze doesn’t find the audience attention he craves, moves back to Atlanta without Sybil, then asks her to go to Chicago with him to try something different. Eventually, their marriage cannot withstand the separations and Blaze’s drug use.
Director Ethan Hawke and his editor Jason Gourson elected not to frame the film in chronological order, but rather to go back and forth in time for Blaze, his wife, and Townes van Zant—I think the intention was to convey the essence of who Blaze was.  However, this arrangement is not successful, in that it becomes confusing for the viewer to keep track of time and place.  For instance, it’s disconcerting to know that the couple split up, after which Sybil reappears as his wife.  Likewise, having Townes van Zant appear and reappear interferes with the story, although Charlie Sexton’s portrayal of him is exemplary.
The mood of the film is rather somber, reflecting the sad, disorganized, somewhat impotent life of a man who constantly made poor decisions and lacked the social skills to make it big in the music world.  Although he and his music is remembered fondly by those who knew him and followed his work, most people who see the film might wonder about the purpose of making the story into a film.
Blaze is perhaps a movie for the dedicated country music fan.  Benjamin Dickey does a fine job in portraying him as a person and a musician, and when the actor’s own renditions of Blaze’s music are played, it is enjoyable to hear him.  We were treated to some of his songs during his and Hawke’s brief appearance in Houston at Rockefellers just before the release of the film.  Dickey’s and Alia Shawkat’s performances are the best part of Blaze, and reflects the possibility that Blaze’s not holding on to her in his life was one of his biggest mistakes.

This is a sobering tale of a musician who tried his best to make it big, but because of some bad luck and personal problems, it was not to be.