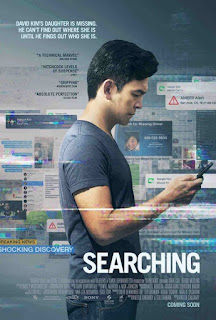 Searching is more and more an apt title as you begin watching the film (mostly reading messages online and watching videos), then stick with it to the end, which doesn’t come as soon as you think. After all, it starts with home movies (haven’t we all sat through those at friends’ and on Facebook?), then it moves to interchanges between a father and daughter—the usual fare (“Clean up after yourself!”).  The next scenes pick up, showing a father trying to connect with his daughter after she went to a study group one evening.  He has missed calls she made to him, and she doesn’t respond to his numerous texts or phone calls.  He doesn’t know whether to be worried or be annoyed with his daughter.
That’s about enough for you to know to avoid giving away spoilers.  David Kim (Cho), the father of Margot (La), eventually reports his daughter missing to the police, whereupon Detective Rosemary Vick (Messing) picks up the case and does her best to reassure him.  Kim is facile with the computer, and immediately runs searches about her to evaluate her qualifications.  She is apparently dedicated and noteworthy, and he relaxes a bit.  However, he keeps searching online for more and more information, something he does throughout the story, and the viewer sees the same information he finds online.
This movie is about many things.  It’s certainly about how much we can find out online by searching.  But it’s also about what we may do with the information we find there.  We see that one can jump to (false) conclusions on specific bits of data. We see the important distinction between presumably objective professionals (like detectives) conducting such searches and someone emotionally involved in interpreting the data.  We see that sometimes the emotionally involved nonprofessional person can spot things or know things a professional might not know or might miss.  The filmmakers seem to be quite aware of the tension and paradoxes here and exploit them knowingly.
At first, I was turned off by the approach taken by writer-director Aneesh Chaganty and his co-writer Sev Ohanian.  My thought was something akin to:  “I spend hours a day on the computer, do I have to do the same thing in a movie?”  I love actors and sets within real-life dramas; reading a story online is off-putting.  But the storytellers were not through, and I would eventually be taken to a familiar place of action and human drama.
In this film, we’re gradually given more and more information that makes a ho-hum drama turn out to be intriguing and even exciting.  It’s a victory for the Internet and plainly shows how substantive intellect applied to it can be invaluable.  The story also ends up being a thriller as we discover incrementally leads that end up nowhere but one in particular that nails the case.
John Cho as the father and the one who essentially carries the movie with impressive skill exemplifies going through every imaginable emotion as he tries to sort out whether his daughter ran away from home, as he discovers how little he really knows about her life, as he gets into trouble for over-reacting and drawing false conclusions, as he deals with his brother Peter (Lee) who apparently knew his daughter better than he did—Cho captures the whole range. Debra Messing competently steps out beyond her sit-com role in TV’s “Will and Grace” to embody a very different character in Detective Vick.
This is a fascinating movie, not only for the content, but also in its focus on the Internet’s role in our lives today.  My experience was one of ambivalence about the techno aspects initially, and by the end, when high drama was so lavishly thrown in, I felt a bit like I had been jerked around.  A good detective story gives out clues all along that one might see (preferably) only in retrospect; this script throws in twists and turns that have simply been added on for dramatic effect.

A surprise thriller that starts out slow and gradually builds up to something you can really care about.

Posted by donnarcopeland at 9:10 AM