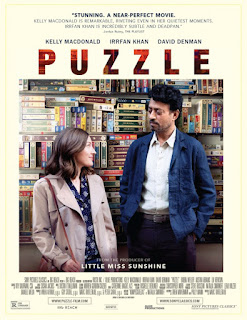 This is a coming-of-age story not of a teenager, but of a devoted housewife and mother.  (About time, don’t you think?)  It’s significant that the film opens with Agnes (Macdonald) preparing a birthday party—and it turns out it’s her own.  Doing for others is the mantra of her life, and she rarely takes herself into account.  She is surrounded by a loving family, her husband Louie (Denman) and her two sons, Ziggy (Weiler) and Gabe (Abrams).  They are all appreciative of her, and although Ziggy has some inkling of her self-sacrifice, Louie is clueless.  He’s a big, huggable teddy bear who thinks telling her she is “cute” is a compliment when he is in fact putting her down.  He claims the traditional role of father (boss) in the family who is supposed to “protect” his wife from important decisions.  Gabe, who has given her a phone for her birthday—which, of course, she shies away from—keeps trying to pull her into modern times.
Never underestimate the upheaval the liberation of a woman(women) can create.  In this case, it comes about through jigsaw puzzles.  Agnes has always been fascinated with math and patterns, and when she opens her presents by herself the day after the party, she tosses the phone aside and shakes the puzzle out of its box, a fateful step.  She quickly works it out and begins seeking out other puzzles. (Figuring out puzzles is clearly a theme for this whole story.)
This takes her to New York City to find more where, once again, fatefully, she sees a notice “desperately seeking a partner for a puzzle competition.”  This connects her with the eccentric puzzle-master, Robert (Kahn), a disaster-obsessed Indian who has become wealthy off a patent he invented.  Here, too, the strait-laced Catholic woman who firmly believes in causality and human control bumps into the Eastern philosopher who says whatever happens is meant to be and outside our control.
In a way, I think this is what the film—and Agnes, ultimately—are wrestling with: free will versus determinism. While Agnes is discovering the powers of free will (which also involves the concept of sin and guilt), she confronts Robert’s observations about fate and determinism, sidestepping the pain of guilt.  When this is considered, the way the film ends makes more sense, in that the filmmakers are making a point about this issue.  It’s slightly ironic, however, in its support of Robert’s philosophy until the end, when I found the worn “I’m sorry” remark as hollow.
Puzzle is a quiet film, but make no mistake in assuming it is a “nice”, calm (boring) story about an ordinary family.  It is raw in depicting the emotional ravages that can occur within the family and among people in general when new ideas and ways of seeing the world and people are introduced at a gut level.  But it is sympathetic both to those wanting to hold onto the old and those who anticipate change.
Praise is due for all involved in the filmmaking of Puzzle.  Director Marc Turtletaub has proven his value in producing the soulful hits Little Miss Sunshine, Loving, and Safety Not Guaranteed; Screenwriter Oran Moverman is credited with Love & Mercy, The Messenger, and I’m Not There; Dustin O’Halloran’s music uncannily syncs with the ambience of each scene; Kelly Macdonald is a tour de force in portraying her lead character, well supported by the exotic and mysterious Irrfan Kahn and the sometimes quietly, sometimes demonstrably emotive David Denman.  I absolutely loved the way all characters are presented sympathetically, avoiding the all-good/all-bad connotation.

Puzzle wrestles with the questions of free will versus determinism in a real-life family drama.