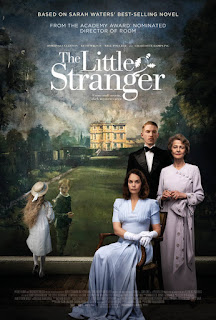 Based on Sarah Waters’ gothic novel, The Little Stranger movie preserves the “creepiness” attendant on an old, crumbling house, mysterious sounds and goings on, periodic tragedies, and an eccentric family, once wealthy, trying to hang on as long as possible.  Whereas the young doctor who’s called for medical treatment now and then appears to be a sensible, dedicated physician (and narrator for the story), he becomes strangely attached to the family and the house, which actually dates back to the time when he was a child and his mother served as a maid at “Hundreds Hall.”
All this is a perfect set-up for a horror movie, on which Lucinda Coxon has based her screenplay, and Lenny Abrahamson has directed.  But in addition to the mysteriousness, the author of the novel had social issues in mind, wanting to show a picture of what began to happen to the idea of class post WWI and the decline of wealthy estates.  We see, then, the brilliant descriptions of the narrator’s impressions of the mansion when he was the child of a maid visiting on a holiday.  As a grown-up physician attending to the inhabitants of the mansion years later, he develops a strange attraction to them.  Clearly, he is in touch with the young child’s aspirations to belong in such a place, but in his grandiosity, he is also convinced that he can help and protect them from any kind of threat, perhaps as assurance that he can belong.  He “over-identifies” with them.
Probably also as a residue of the class system, the well-to-do family is ambivalent toward accepting Dr. Faraday wholeheartedly.  Some of his medical treatments are met with ambivalence, as are his attempts to woo the daughter of the matron.  Caroline (Wilson) is grateful for Dr. Faraday’s (Gleeson) attention and care, but going beyond the professional relationship is not a given for her.
The author of the novel and the filmmakers have been clever in maintaining ambiguity and suspense, so that the reader/viewer has to observe, analyze, and guess what is going to transpire.  The haunting of the house is seductive—particularly if it’s related to the deceased child of the owner—but just as much is the pull toward a “psychological” explanation, as defined by Dr. Faraday and his colleagues.  If you find that the ending is ambiguous, you will not be alone.  So you get one character’s observation of “Something in this house hates us” and then, “This whole thing between us has never been real”, the former indicating a haunted house, and the latter being more of a psychological explanation.
Domhnall Gleeson is up to his previous performance in Ex Machina in portraying a complex, somewhat naïve character.  Ruth Wilson, Will Poulter, and Charlotte Rampling are excellent in their supporting roles. Wilson expertly exhibits an ambivalent person who is perpetually torn between two positions.  Will Poulter is skilled in showing a dark character with layers of anger and resentment.  Charlotte Rampling always has just the right balance between being threatening toward others and being playful.
Working against the film is the pace, which many found slow, although since much attention was given to character development, I didn’t mind it. What did bother me was the darkness of the picture, which may be attributed to a dim bulb on the projector.  At any rate, many scenes were so dark it was difficult to see the action.   Understanding Irish accents is also a problem for the viewer at times.
In its favor, are numerous horrific scenarios, some of which come as a surprise and make you jump in your seat.  As mentioned, the additional commentary on social change and upheaval of the time (post WWI) describe the characteristic viewpoints of the wealthy and the common.

A film that does justice to its genre of horror, drama, and mystery.