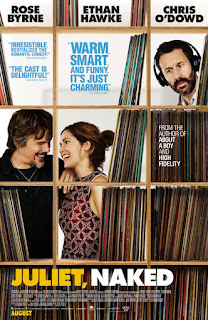 What a delightful and entertaining rom-com this turned out to be!  It has smart, funny dialog, along with a lot of heart and truthfulness.  Based on a Nick Hornby novel, the screenwriting (Evgenia Peretz, Jim Taylor, and Tamara Jenkins) syncs well with Jesse Peretz’s direction, and the actors (Byrne, Hawke, O’Dowd, and Robertson) hand it to us on a silver platter.
The story centers around Annie (Byrne), a modest anthropologist and curator, who lives with a self-preoccupied film professor named Duncan (O’Dowd), whose music idol is a washed up singer named Tucker Crowe (Hawke).  Crowe is not only his idol, he has a school boy-like obsession with him; e.g., pictures, posters, and other Crowe memorabilia line the walls of his study at home—a little creepy, right(?), which is what we are supposed to feel.  Understandably, Annie finds this insufferable, but she tolerates it as best she can.  (She’s had a life that steered her toward patience.)  Then one day, her exasperation surfaces, and she responds to Duncan’s effusive compliments about one of Crowe’s songs on his blog with a negative review.
Much to her shock, of course, Tucker writes back about how much he agrees with her critique.  They have a back-and-forth online which blossoms into a friendship.  Meanwhile, Duncan has been prey to a new faculty member, succumbs to her charms, and subsequently gets kicked out of the house.  In Tucker, Annie has discovered someone who is interested in her and what she has to say, a novel experience for her. Of course, in her innocence, she regards this as a platonic friendship, but she does realize that Tucker makes her feel good about herself.
What follows elaborates on Tucker’s history (He’s like the old woman in a shoe—he has so many children he doesn’t know what to do.) and his way-extended family, he and Annie meeting in London [him, with his lovable child Jackson (Robertson) in tow], hilarious encounters with Duncan, and working through the complex set of relationships.
It’s clear that much thought and consideration of many current issues went into this production.  It touches on how professional women are regarded in the workplace and in their personal lives; it demonstrates how fame can lead a star down paths that have lifelong repercussions that can be both regrettable and shameful; it shows the pain and consequences for those who are in the star’s path and perhaps left behind; it gives an example of how one of those stars attempts to compensate for previous weaknesses; and shows the self-actualization one woman experiences when she finally realizes she has aspirations and choices she needs to heed.  None of this is ground-breaking, of course, but the way it all comes together is novel.
On the surface, Juliet, Naked could be regarded as simply light entertainment—the usual.  But it doesn’t take much to scratch below the surface and glean many basic human truths within it.

I congratulate the novelist and filmmakers on their success in upgrading a genre from a “That’s nice!” to an examination of human strengths and foibles.