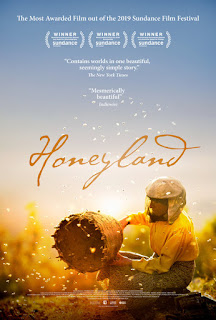 I was struck by Hatidze’s face when she first appears on screen.  She has one of those visages that reflect life experiences; and the fact that the wrinkles all up her cheeks seem to be from smiling gives us a clue as to her personality.  Of course, it’s also obvious that wrinkles from worry are there as well. As an aside, it turns out she is only in her early 50’s, but looks more like 80, a reflection of the life she has had.
At first, it seems like Hatidze and her aging, ailing mother are leading reasonably comfortable lives, except that the mother is bedridden and losing her sight and hearing.  They bicker, but convey to each other as well their devotion.  The mother is sympathetic with Hatidze, knowing that she is a burden, and she clearly seems ready to die, but life persists. As the youngest daughter in the family, Hatidze takes seriously the custom that she is to take care of her mother until she dies, even though she has numerous brothers.  Hatidze shows only traces of resentment about this, and consistently tries to do the best for her that she can.
A significant event occurs when a large family with seven children settles in next door. Hussein and his wife Ljutvie seem to be industrious, fixing up abandoned crumbling structures on the land and raising animals.  The kids do a lot of tumbling around and wrestling with one another, but they also help a great deal with whatever chores come up.
Since Hatidze has always had an isolated life, she is thrilled to see the family and immediately bonds with the children, singing, playing, dancing, and teaching one boy about beekeeping, her primary occupation—her livelihood really.
Hussein shows an interest in beekeeping, and Hatidze freely shares with him her considerable knowledge about it.
In addition to the cross-cultural aspects of Honeyland, the theme of human interactions with nature is strong, first showing up in demonstrating how Hatidze relates to the bees, singing to them, and expressing her gratitude for their honey, always leaving them half for themselves.  Hussein represents the modern way of thinking that nature (and anything else in reach) must be conquered and grabbed.  [I wanted to scream at him like Ygritte to Jon Snow in Game of Thrones:  You know nothing, Hussein!].  But unlike Jon Snow, Hussein does not learn from experience or others’ guidance.  Greed and a tempter get the best of him.
What follows is conflict and tense conversations between Hussein and Hatidze.
The film ends on a thoughtful note about how this story plays out, leaving the viewer with the sense that Hatidze’s inner strength and strong character will see her through to the end, without which it might be a bleak story.  A follow-up interview with the directors and their comments about Ljutvie and her innate talent for being in front of a camera is further testament of her strength and fortitude.
Directors Tamara Kotevska and Ljubomir Stefanov present an illuminating—and entertaining—picture showing the enculturation of diverse groups and the delicate balance between nature and humans.  Hatidze represents love of nature and other human beings; Hussein, the self-serving capitalist who ignores the importance of both.  Cinematography by Samir Ljuma and Fejmi Daut is breathtaking from the vast expanse of the surrounding countryside to the intimacy of daily life in a family.
The film seems as much a drama as a documentary, and the real people portraying themselves is truly remarkable.  Also remarkable is the fact that the story is the real story of what transpired.  Neither of the directors speaks the language of the protagonists, and the work was filmed in real time.  For instance, they were unaware beforehand that the large family would arrive while they were there.  Cinema Veritè at its best.

Take a trip to the beautiful, remote countryside of Macedonia in Turkey for an interesting excursion into human struggles and joys and their relationship with nature.

Posted by donnarcopeland at 5:22 PM