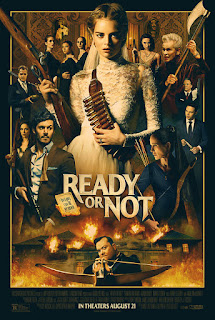 The entire premise on which this film is based is that family myths are true and their precepts must be heeded when, by now, we all know that everything your family tells you is not necessarily so.  The picture opens in a huge mansion with everyone running around with masks on.  It looks intriguing, but don’t hold your breath.
Thirty years later, the Le Domas family myth lives on and the rituals are still observed, an excellent time to teach young children the traditions.  After having been somewhat estranged from his family, the oldest son and heir to the family fortune, Alex (O’Brien), has brought his bride home for their wedding.  Grace (Weaving) is a bit intimidated by the family, but sees their tradition of a game to welcome new members to the fold as amusing, and she’s ready to play along.
Little does she know what she’s in for; Alex has not divulged to her the bizarre aspect of “games” in their household.  He gives her a chance to back out, but she thinks he’s being silly, and goes ahead and draws the card that will indicate the game they will play:  Hide and Seek.  She’s a little puzzled, but immediately goes to look for a place to hide; the family will play the part of the seekers.  Foreboding dawns immediately when Grace elects to hide in a dumb waiter.
That much will suffice in giving the reader a hint as to what the story will be about. Horror buffs may revel in this production filled with gore to the laughable stage.  It offers a “thrill” a minute; just leave your logic at home.  Grace will be running and fighting for her life for the next hour.
It seems to me, the hinge on which everything depends, the script by Guy Busick and Ryan Murphy, falls short in providing material that this group of fine actors could exploit, nor does it engage the viewer in reacting to the horror and mystery.  It is something of a hack job (pun intended) where one impossible event follows another. For instance, one is not meant to question how a character can use her hands that have been shot and pierced with a nail to scale an iron fence, choke a pursuer, and use them for other means of escape.
Samara Weaving performs admirably, showing real strength beneath a veneer of blond beauty, along with strength of will, even when it looks like she’s done for. Her feats are not always plausible, but they elicit interest and some degree of satisfaction.  Adam Brody as the loyal brother of Alex, also brings expertise to his role.  The other actors, including Andie MacDowell and Henry Czerny, are solid back-ups for the main stars.

Ready or Not is a film for horror fans who enjoy the action without having to think through the logic of the plot.

Posted by donnarcopeland at 11:18 PM