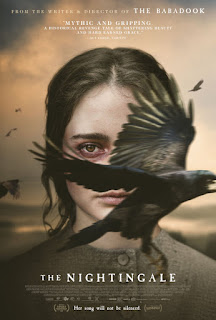 The Nightingale in this story is an Irish woman with a lyrical, clear-as-a-bell voice caught up in the colonization of Australia 1825.  Having served a prison term, she needs papers from her husband’s superior to absolve her of her crimes and be free.  She has an infant and she and her husband are trying desperately to escape to parts unknown.  The problem is Leftenant Hawkins (Claflin), who has a hold over both Aiden (Sheasby) and Clare (Franciosi), has no qualms about exacting services from her against her will.
I wanted so much to love this movie.  The writer/director Jennifer Kent, cinematographer Radek Ladczuk, and musician Jed Kurzel all worked together on the well received Babadook (2014) in which a woman is forced to deal with supernatural forces.  In contrast, in this film the main protagonist, Clare (Franciosi), must confront and deal with a real man whose ethical/moral principles never seem to have registered.  We admire her fortitude and perseverance in overcoming one obstacle after another, only to find herself trudging through the Australian outback, guided by an Aboriginal, Billy (Ganambarr).
My primary issue with the film is in the character of Clare, a woman tough as nails in some scenes, but sinking into passivity in others when real action is required.  It’s an inconsistency in character that is simply not plausible.  I didn’t necessarily expect her to be super-hero heroic—as in recent films attempting to highlight the power of women—but I would expect the fire that propelled her toward vengeance and fuel her stubbornness toward her black guide would last to the end when she finally confronts her tormenter.  But she freezes at significant times, which is inconsistent with how she is portrayed earlier in the film.  There are also lapses in judgment, which seem uncharacteristic for someone of Clare’s temperament.
The Nightingale is beautifully filmed, but would have benefitted from more judicious cutting of violent scenes that go on too long and some of the scenes where the actors are trudging through brush.  Aisling Franciosi makes a wonderful Clare, showing her honesty, solid values, and fortitude in the face of adversity.  Sam Claflin captures the smooth sleeze of a lieutenant who has been promoted beyond his capabilities and has no compassion for others, but only for his own advancements.

A beautifully rendered film about a convicted Irish woman’s struggles in surviving and maintaining her family in Australia.

Posted by donnarcopeland at 11:24 PM