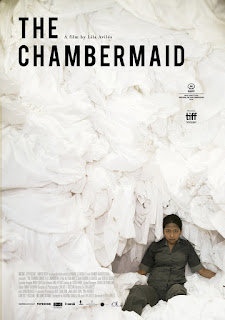 The life of a chambermaid is not one most of us can imagine, but writer (with Juan Marquez) and director Lila Aviles gives us a vivid lacerating depiction of what it is like from the point of view of one who walks that path.  First of all, surprises abound when the maid opens the door to a room.  She might even find a guest under a bed!  She may have to tidy a room in an extraordinary mess and figure out how to remove stains.  The film will bring up memories of Alfonso Cuaron’s Roma about the devoted housekeeper of his childhood, as well as the well-publicized incident of Dominique Strauss-Kahn, head of the International Monetary Fund, being charged with sexual assault of a Sofitel Hotel housekeeper.  All charges of aggression against him were dropped, but he only denied the aggression against her.  The implication is that some guests presume that housekeepers should be at their bidding.
It’s noteworthy how workers so often are regarded by guests as automatons who can be “strongly requested” to perform all kinds of services, such as babysitting an infant so the mother can take a shower.  In this case, the wealthy mother seems to take a personal interest in Eve, but leaves the hotel without notifying Eve or following through with offers made to her.  It’s clear many guests never really lookat the women; they’re part of the furniture.
But the well-heeled are not the only ones willing to take advantage of others or make empty promises.  Eve’s co-workers are shown to be just as self-serving and exploitative as her superiors.
But this story is just as much an in-depth look at the main character, Eve (Cartol), a dedicated, hard worker at a hotel in Mexico.  She clearly comes from modest circumstances, but has solid moral values and is more intelligent than she seems at first.  In following her on her daily routines, we get a picture not only about her character, but those of her superiors and guests at the hotel as well.  This is a sociological-political cross-section of the society Eve lives in.  We see the aftermath of guests’ messy—even horrifying--nocturnal activities, the challenge in swiftly cleaning up the rooms, the political manipulations of co-workers and supervisors, and the suddenness with which privileges are revoked.  It makes it brilliantly clear how difficult it is for some to move up in the world, despite their talents and good nature.
Just as The Chambermaid will be compared with Roma, Gabriela Cartol will be compared with actress Yalitza Aparisio’s portrayal of Cleo.  She captures the essence of the modern-day “servant” who is sincere and energetic in fulfilling her duties, and is a real person behind the mask she is forced to wear.  Also, as in Roma, pulses of humor and lightness keep the film from becoming too heavy.
As the world seems to be moving toward widening gaps between the rich and the poor, this engrossing, expertly rendered film will assume even greater relevance. Lila Aviles is a director to keep your eye on.

The life of a chambermaid is far from boring, but not necessarily in a positive sense.

Posted by donnarcopeland at 9:36 AM