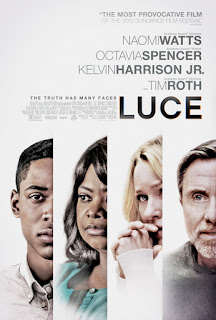 Complexity is an understatement in this film about weighty topics ranging from race, privacy, security, trust, secrets, and communications that are misread because of listeners’ presumptions and conscious or unconscious wishes.  Luce’s strength is in illustrating how much anxiety and pain come to bear when there are no easy answers.  It’s a story that is worthy of much discussion after the movie among those genuinely moved by the events depicted.
Initially, the Edgar family seems so admirably ideal.  Amy (Watts) and Peter (Roth) adopted a 10 year-old survivor of abuse and former child soldier in African Eretrea, and seem to have brought up a black-skinned child with all the privileges typical of privileged white children.  Named ‘Luce” (meaning “light”), the child is so gifted, personable, and emotionally balanced, he arouses expectations of fame, not only from his parents, but teachers and even other students—which, ironically, becomes a burden to him when he sees how favorably he is treated compared to fellow classmates.
In high school, Luce has a diverse group of friends and easily recognizes the bias with which some are treated, while he is excused.  He has a highly ambivalent relationship with his favorite teacher, Miss Wilson (Spencer), who is one of those who, he feels, expect him to be perfect.  He and the history teacher have sparring sessions fraught with a mixture of respect, overt politeness, and outright barbs.  It’s hard for the viewer to sort out the truths in this relationship, just as it is for the protagonists.  In a clever bit of script writing, the two people at different times make the statement, “Unfair doesn’t make it untrue.”
During the course of the drama, we learn more about the Edgars’ conflicts with each other and between them and Luce.  It’s clear that husband and wife differ in their relationships with Luce.  As best as she tries to keep her private life confidential, Miss Wilson’s family history is exposed in a most unsettling way.  Luce’s diverse group of friends provides further intrigue and muddying of the waters.
This production, directed by Julius Onah and co-written with J. C. Lee is fascinating in its grasp of contemporary issues that are not easily sorted out, all while being engrossing and entertaining.  Kelvin Harrison, Jr., as Luce performs expertly, portraying a character a bit too facile in his explanations and studied politeness.  However, at 25, he just can’t be convincing as a high school teenager.  (My ongoing gripe is the casting of young adults to play teenagers when there is an abundance of qualified younger actors in that age range.  Age discrepancy is highly disconcerting to those of us well acquainted with teenagers.  All of the “teens” in this film are in their mid-twenties, and one is 30 years old.)
Octavia Spence is one actor continually worthy of praise.  She has recently branched out into roles where the character is a mix-up of good and bad qualities (e.g., Ma), all captivating, and highlighting her ability to portray conflicting personality characteristics.  Naomi Watts and Tim Roth also have nuanced performances that are convincing as real people going through major self-exploration and adaptation.
Julius Onah is early in his career as director and producer (this is only his second full feature film), and with Luce, he shows promise as a sensitive filmmaker knowledgeable about human frailties and strengths, and expert in storytelling.  Contributing to the quality of Luce are writer J. C. Lee, musicians Geoff Barrow and Ben Salisbury, and cinematographer Larkin Seiple.

Combining mystery, intrigue, and entertainment with topical issues of race and privilege, Luce challenges viewers to question what is truth in the story and ways in which our own biases may come into play.