DOLEMITE IS MY NAME 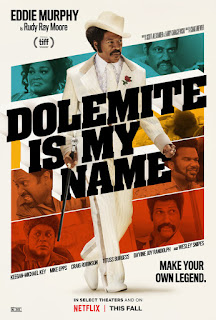 Here’s a way for black people to get into their groove and for those of us unfamiliar with Rudy Ray Moore (aka “Dolemite”), the “Godfather of Rap”, to jive a little with him and his cohorts when he is just getting started in show business in the 1970’s.  In the beginning of this story, he’s trying to make it as a comedian in L.A. when he has an inkling that there are black audiences who are not being served in the entertainment industry.  He finds in his stand-up routines that black people can appreciate a certain kind of humor, so he cagily puts out three bawdy records that sell well—much to others’ surprise, and even to his own.
It turns out that what was regarded by most of America at that time as profane—even porn--black people found in it a particular kind of humor (as in “Yo daddy’s a freak, and yo mama’s a whore”—the beginnings of the rap genre).  This encourages Rudy—who has stellar aspirations to add singing, acting, and film producing to his resume.  He is determined to satisfy the appetites of his people without regard to conventions (primarily white people’s), running up against not only white “shirts”, but (middle/upper class?) blacks in the arts and in production, who have been going in the direction of “refinement” as they envision it.  Rudy crashes right through all of that, while bringing many of those people on board with him.
Rudy Ray Moore (expertly rendered by Murphy) is a fascinating individual with the unusual ability to sell his visions (and he is a master salesman) to producers who will back him so that he can give full vent to his creativity, first and foremost in comedy with music (what would eventually become rap), but as well in business (managing to get funding, construct a studio, act in and produce a movie).  How Rudy got started in show business is remarkable.  After serving in the Armed Forces, he was working in a record store, trying to get the DJ (Snoop Dogg) to play some of the records he’d made, which were based on a homeless man’s lewd limericks.
We get to go along with Rudy on a major part of the making of his first movie, Dolemite, its significance being that it’s the first of what came to be known as Blaxploitation films. The filming of it has hilarious scenes where ineptness is clearly visible, but in Rudy’s hands becomes a delightful farce, helped along by Wesley Snipes (stunning!) as director D’Urville, Keegan-Michael Key (socompetent) as writer, Kodi Smit-McPhee (respectful, how-old-is-he? cinematographer), and Lady Reed (Randolph), Rudy’s creation of a saucy character from a self-deprecating, disillusioned woman.
Rudy is a complicated character in whom people have little faith; but in actually possessing talents in salesmanship, sensibility about black folk, and astute judge of character, he was able to pull it off, not only by proving his worth to the powers that be, but also recognizing traits in others that could be encouraged and brought out to serve his purposes.  A prime example is Lady Reed (Randolph) whom he decides after talking to her in a bar that she could be a funny sidekick in his comedy routine.  Writer Jerry Jones (Key) helps in coaching Rudy in script writing.  Rudy plucks his reluctant, snobbish director D’Urville Martin (hilariously played by Snipes) out of a strip club.  He accepts a new graduate (Smit-McPhee) from film school to be his cinematographer.  His old friends Ben Taylor (Robinson), Jimmy Lynch (Epps), and Daddy Fatts (Rock) are his reliable stand-bys.
In Dolemite is My Name, Eddie Murphy and Director Craig Brewer revive this character with apparently similar sensibilities about the world today as Rudy had about his people at the time.  It may seem a bit slow to viewers in the beginning, but that is partly because it takes a while to get oriented in another world—at least for many of us.  This was certainly true for me, as I had not seen previews and knew nothing about Rudy Ray Moore.  But after a time it became fascinating and truly funny.

An entertaining account of the beginnings of rap popularized by a remarkable figure in showbiz.

Posted by donnarcopeland at 5:34 PM