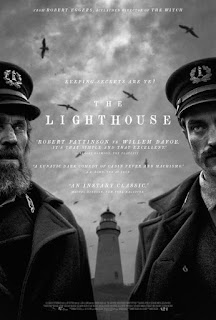 In a creaky old lighthouse, two men, one subordinate to the other, ride out a storm—and are much worse for the wear. Thomas Wake (Dafoe) is the “wickie” (name ascribed to lighthouse keepers who have to change the wicks) in charge, and he has a new, taciturn assistant (Pattinson) who needs the job but is clearly not happy to be in this particular place.  We get the impression right away that Wake is an irascible taskmaster who gives his assistants menial chores and has a high turnover in assistants.  Reportedly, the last one went nuts.  Wake attributes that to the loneliness of their job, and the isolation is just too much for some.  Or is it him?  The conumdrum persists throughout the story.
It does seem to have affected Wake; he’s an odd duck who garbles out seafaring poetry, is generally disdainful, insists on being the only one who can go upstairs and tend the lighthouse light, and farts with abandon.  His assistant Winslow seems to have a chip on his shoulder, but he gives so little away about himself, he’s a bit of a mystery—at least in the beginning. Much—although not enough for this viewer—will be revealed in “giving his beans” to Wake when they’re drunk.
One day, Wake expresses apprehension about the wind changing, which is a harbinger of a major storm on the way.  As is usual, Winslow brushes this off; he frequently expresses his skepticism toward Wake and even accuses him of lying, if for no other reason than to provoke Winslow.
But the storm does indeed arrive and stays for days.  Envision these two men cooped up together with alcohol and dwindling supplies. Writer/director Robert Eggers has envisioned that in a much more grotesque way than you would likely ever imagine.  Wake goes off on rambling, indistinct tangents of poetry about the sea and bonny lasses, Winslow seems to work hard (not according to his boss), with escalating resentment, and by the end, in drunkenness, hurling insults at Wake with vivid imagery.
As the storm rages on, the scene inside the lighthouse gets weirder and more bizarre, which is the major part of the movie.  Is this simply a picture of what happens to people when they are mashed together in a small space for too long of a time?  Is this the outcome of one person literally driving another crazy?  Is it that Winslow’s dark past is having repercussions in the form of hallucinations and paranoia?  Is it about Winslow killing a gull, which Wake had specifically warned him against because of the dire consequences?
As you might have guessed, The Lighthouse is difficult to watch—not the least of which (for me) are the dark screens in which you can’t see what’s taking place.  This is one of my pet peeves about current cinema:  It’s frequently too dark!!  If I go to see a movie I expect to be able to see it.  But it’s also difficult to watch because it’s stomach-curdling (scenes of a dirty hovel, drunkenness, gaucheness, and disgusting violence). Just as the darkness of the scenes obscures meaning, the muffled speech of the actors is frequently indiscernible, especially Dafoe’s (whom I usually love).  Robert Pattinson is a great foil in his challenging mysteriousness and barebones ability to show his character in the raw.  These two actors are the best of the movie.
The script by Eggers and his brother Max constitutes the weakness of the film in its inability to convey some kind of meaning beyond that of two men under certain circumstances making a toxic combination.  Perhaps if the background of both characters had been made more explicit, the story would be more meaningful.

This lighthouse doesn’t give off much light, either literally (it’s mainly dark gray) or metaphorically.


Posted by donnarcopeland at 10:43 AM