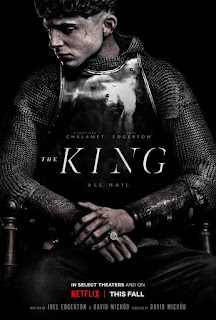 The King presents an interesting picture of King Henry V of England I in the early part of the 15thCentury.  The script, co-written by Joel Edgerton and director David Michod, draws some from history, more from Shakespeare’s plays, Henry IV and Henry V, and then elaborates on all sources.  The viewer should regard it as primarily a dramatization only loosely drawn from history and Shakespeare.
As it turns out, the filmmakers have rewritten their sources to create a story about a “reluctant prince” who has major conflicts with his father, King Henry IV (Mendelsohn) about the constant wars the father has waged.  Henry V (Chalamet) is presented first as a playboy who has no desire to be a king, and doesn’t even want to attend to his ailing father.
It’s a bit of a stretch that such a person could suddenly turn into an admirable figure as he does in the film, but that’s the drama of it.  After the sudden change, Henry is shown to be a skilled and ferocious opponent in swordplay, a man who is astute and listens carefully to arguments presented to him, and makes shrewd decisions based upon his deductions.  He is not susceptible to indignations purposed upon him by others; he can take decisive, even ruthless, action when he suspects someone is lying or outright betraying him; and he keeps a cool head in negotiations with opponents.  Of course, he is also very handsome and appealing.
The way Henry V becomes king is his take-charge stance after his father has chosen second son Thomas as his successor, someone who seems not to be a match for his brother, either intellectually or physically.  Henry tries to save him and avoid another war, but Thomas is recalcitrant, and after a series of events and time, the reluctant Henry becomes king.
The rest of the story is about Henry’s being drawn into war, despite all his efforts against it, his need to identify those around him he can trust, and resorting to finding his old friend and caretaker John Falstaff (Edgerton) to be his primary advisor and strategist (especially in war) and supporter.
The French don’t come across very well in this story; both the dauphin (Pattinson) and his father, King Charles VI, are disdainful and insolent toward Henry, refusing to go along with the ways he presents to avoid war.  Although they are partially redeemed by their eloquent--rather audacious—princess Catherine (Depp) who stands up to Henry in a very entertaining contretemps.
The craft of The King is admirable in Michod’s direction, the music (Nicholas Britell) and the cinematography (Adam Arkapaw), and the actors capture their roles well for the most part, especially Chalamet, Edgerton, McKenzie, and Depp.  Editing (Peter Sciberras) can be faulted for extending the battle scene far too long in a movie that is already over two hours in length. The scenes are effective in showing the bloodiness, muck, and brutality, but become tiring halfway through.
I liked the Michod and Edgerton’s elaboration on historical events to present a character who is admirable in so many ways, trying to achieve peaceful resolutions, but mindful of counteracting forces.  This Henry V is someone we can admire, but viewers should not go with the expectation of seeing a production up to the level of a play by Shakespeare.

Henry V is an entertaining take-off of Shakespeare’s version, this one having a message of peace and the value of unity.