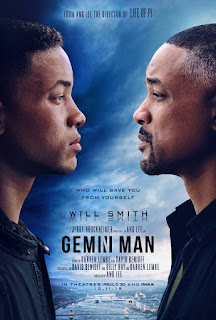 This is not your typical father-son drama, but that is one of the themes applicable to three characters in the film.  Clay Verris (Owen) dedicates himself to serving as a father figure for young men in training, seeing himself as a “loving, dedicated, present” father—words that will be thrown back at him at a later time.  Henry Brogan (Smith) is one he took under his wing, making him the top, universally acclaimed assassin in the world.  After Brogan became employed by the U.S. Government, Verris started his own company, Gemini, which specialized in DNA research and cloning. From the trailer, you know that he has made a clone of Brogan’s DNA, which Verris raises as his own son, calling him Junior (also Smith).
At a certain point, Brogan has had enough and is ready to retire; after 72 killings, he’s feeling a “hurt” deep in his soul.  Just as he starts launching his boat to go fishing, though, strange things start happening, and he will gradually learn that he is being played by more than one party.  First of all, he spots a government agent working at the boat dock disguised as a kind of clerk, but he blows Danny’s (Winstead) cover in nothing flat, and because he appeals to her, they become partners in solving the mystery of what is going on behind the scenes and who it is who suddenly turns up, trying to kill him.
The story has intrigue in being set and filmed in exotic places like Cartagena in Colombia, Budapest in Hungary, and even the southern state of Georgia, and it has thrills (a daredevil motorcycle chase in one of the cities, as well as extended physical fights with impossible maneuvers where the fighters get up repeatedly after looking like they’ve been killed), all of which resembles most action films.  It is appealing to see the warm and genuine Danny fight with the same ferocity as the men.
Most of the drama consists of Brogan and his clone struggling with one another, one to kill, one to survive, and this is mostly entertaining (except for each encounter being extended for too long a time), but the real “meat” of the story is whether and how they will work through the curious position each is in, one being a clone of the other.
Complex relationships between characters has been Director Ang Lee’s forte (Brokeback Mountain, Life of Pi, Crouching Tiger, Hidden Dragon, The Ice Storm), and I presume it was meant to be similar in Brogan and Junior’s relationship here.  It certainly seems like fodder for a rich characterization of the most complex relationship of all.  But with the director’s and writers’ focus on action rather than psychology, Gemini Man looks and feels a lot more like the generic action film than a psychological exploration of a futuristic relationship, which was not neglected, but was only minimally explored.

Gemini Man has an intriguing aspect, but this takes second place to the typical action movie thrills.

Posted by donnarcopeland at 11:22 AM