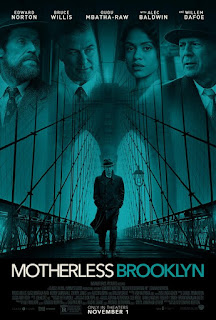 Picture New York City in the 1950’s with a gumshoe detective following clues to weed out the killer of his life-long mentor.  Or at least picture one of the detective films you’ve seen—or heard on the radio—from that time (e.g., Mr. Keen, Tracer of lost persons; Dragnet), with the smokiness of the rooms, the seediness of the neighborhoods, and the persistence of a committed private detective.  That’s the movie Edward Norton has written (based on Jonathan Lethen’s novel), produced, directed, and starred in, in Motherless Brooklyn.  Norton and his cinematographer Dick Pope capture this period’s mood and effluence of city corruption that ends up being a crime thriller, complete with car chases, goons, and the pressure of rescuing an endangered damsel.
The extra intriguing twist to this story is that the main character Lionel Essrog (what a name!), played spot on by Norton, has Tourette’s Syndrome (a disorder involving involuntary tics and utterances).  It’s not really relevant or essential to the story, but adds a touch of color.  Lionel works in a private detective agency headed by his lifelong mentor Frank Minna (Willis).  From the time Frank took pity on and rescued Lionel from bullies in a boy’s home, he has continued to protect him.
But Frank is also mysterious about jobs he’s working on, giving Lionel and the others only sketchy details about it, but explicit instructions about how to keep an eye out and what to do if…  The movie begins with just such a job, during which Frank is killed.  What ensues is Lionel following the slim clues he’s been given or picked up to find the killer.
This leads him into major city politics and Frank’s role in it; Moses Randolph (Baldwin), who seems to be in charge of major city “improvements”; a homeless man (Dafoe); activist    Gabby Horowitz (Jones); and a mysterious “black woman” Laura Rose (Mbitha-Raw).
The novel—and consequently the film—seem to be at least loosely based on true historical events in the 1950’s, documented in a 2018 film, Citizen Jane:  Battle for the City, when Robert Moses, a city planner, began to dismantle city neighborhoods to construct freeways and bridges through them without regard for the people affected.  That is what is happening in this film, but it’s put into a drama that is exciting and will pull at the heartstrings.
This is a fun movie for those who can get into period dramas from not too long ago and follow leads and cues the detective Lionel chases—all while explaining his “brain problem.”  The cast is superb (what a juxtaposition of Baldwin’s Moses Randolph and his “Saturday Night Live” Trump impersonations), with Norton capturing the Tourette-plagued Lionel, Mbitha-Raw as an attractive, accomplished woman with a dark history, Willem Dafoe as the mysterious homeless man with a significant background, Bobby Cannavale as a compromised man, and Leslie Mann, Michael K. Williams, and Cherry Jones all providing star-quality performances.

A cloak and dagger story harking back to the 1950s with the added twist of a detective with Tourette’s, but possessing a formidable memory.