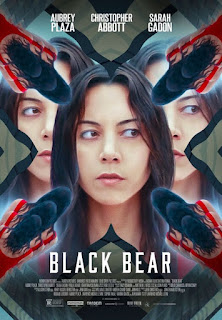 In a rather tangled two-part plot, writer/director Lawrence Michael Levine explores some version of the “life imitates art” juxtaposition.  To illustrate his point he uses a recurring image of the main character in a meditative position surrounded by nature.  The first scenario is presented with certain actors in certain roles followed by those same actors and characters enacting a different story.

In Part One, Aubrey Plaza plays the role of a director (Allison) seeking inspiration at an isolated retreat owned by Gabe (Abbott) and Blair (Gadon), an unmarried couple expecting a baby.  One of the first evenings with them is disturbing—for the viewer, as well as for Allison—by the couple’s constant bickering and by Blair’s jealousy toward Allison.

Suddenly, in Part Two, a movie is being shot, with the plot being somewhat the same as in Part One, but with the characters shifted around.  Here, Gabe is a movie director married to Allison, the star of the movie.  That is, “Gabe” and “Allison” are the married couple, and “Blair” is a rival of Allison.  Living up to what Allison has claimed in the first movie—that she was an actor difficult to work with, Allison portrays that character in the movie, being late to the set and arguing with her husband (the director, now, in the movie being shot) about the script.  Lying is a sub-theme throughout both parts of Black Bear.

The movie demonstrates Aubrey Plaza’s skill in portraying a chameleon personality who can act out a scene on the spur of the moment and thus has some mystery about her.  Christopher Abbott and Sarah Gadon, her co-stars, likewise show very different personas, depending on what is called for in the script.

As intriguing as this might be for those informed about anti-mimesis (Oscar Wilde’s belief that “Life imitates Art far more than Art imitates Life”) and the notion that we only see what artists have taught us to see, I think most viewers of this movie will not be entranced by it.   I appreciate what writer/director Lawrence Michael Levine has tried to do, but figure that such esoteric content will be lost on most, and that they will see the movie as a bit of a jumble.

On the other hand, I figure that actors themselves will love the script, which embodies what they have to do on a regular basis.  It also reflects the constantly changing relationships they see every day in their own lives.

The symbolic significance of the black bear of the title is more difficult to determine. If it refers to William Faulkner’s “The Bear”, I can only relate it in terms of Falkner’s equating the bear in his story to nature or to the wilderness and its death.  The last scene of the movie is Plaza’s character encountering a big black bear with interest and a glint in her eye. Is she encountering the bear as something of nature to which she needs to get reconnected? Or is it about nature on its road to destruction?

This is a film primarily for those in the business of filmdom or to those who ponder humans’ relationship with nature.