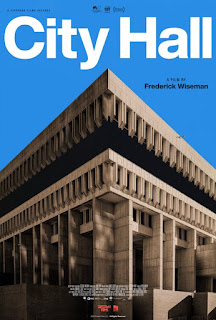 For a comprehensive look at city government, Frederick Wiseman’s City Hall would be almost all you would need to see. Not that every city is the same, but to see the wide breadth of a big city mayor’s reach and responsibilities, it’s educational.  At least it was for me; although I’ve lived in a big city for years, always attuned to city government, I had never stopped and thought about what a mayor actually does in such broad scope.

Wiseman is noteworthy for his award-winning documentaries and about cities in particular (Monrovia, Indiana, Ex Libris: New York Public Library, In Jackson Heights, National Gallery).  In his films, it’s almost impossible to separate the filmmaker from the film, because he sees them as reflective of personal experience, not objective portraits.  Since he is usually the cinematographer as well as the writer/director, his camera is observational from his point of view.

Another characteristic of Wiseman’s films is the absence of narration or exposition; in City Hall, for instance, the viewer has to watch a scene for a while to figure out who the characters are and what the meeting on screen is about.  Despite that, Wiseman manages to capture dramas of one sort or another to heighten interest.

Wiseman’s primary subject here is Martin (Marty) Walsh, the mayor of Boston, Massachusetts.  Walsh, the son of Irish immigrants, survived childhood cancer and eventually graduated from Boston College.  From there his assent was rapid from being a labor union president and state representative and going on to win the election for mayor in 2013, and a second term in 2017.

It’s easy to see why Wiseman would want to capture the tenure of Walsh as mayor of Boston.  He has strong basic values of equity and fairness, and after overcoming a brief addiction which taught him the importance of acknowledging emotions and talking about significant experiences, he is sensitive to the challenges and needs of the disadvantaged whether by race, sex, or ethnicity.  This allows him the capacity to move the city forward in practices, policies, and programs that are meant to benefit the general public.

City Hall is a vast cityscape on film as we get a good look at the buildings and streets, and then see the huge number of services and programs it sponsors.  We “drop in” on numerous meetings, listen to the citizens discussing projects with city leaders—and often, the mayor himself, who stays in close touch with as many people as he can.  The film opens and closes with city staff responding to citizens’ calls, always polite, patient, and helpful.  We’re given views of the usual city services and events—fire, police, sewage and garbage collection, libraries, schools, parks, budget reviews, organizational meetings, traffic control and monitoring, parking, housing and the homeless, addiction prevention and treatment, real estate development and issuing of permits and fines, tax issues, continuing education classes, advocacy, and community outreach.

Reflecting the mayor’s compassion and broad interests, he’s involved in planning a celebration of the Red Sox victory in the World Series; coordinating a convention sponsored by the NAACP; and managing the wide-ranging diversity among ethnic groups, immigrants, LGBTQ, the Disabled, and women’s issues. After Hurricane Harvey, he arranged for 18 truckloads of supplies to be sent to Houston, Texas.  He says, “Differences don’t have to divide us”; a coalition of diverse groups creates democracy.

Viewers should be alerted to the length of the film:  4½ hours long.

Here is a most admirable government leader who fosters his citizens’ activity and interest, thereby showing his commitment to democracy.