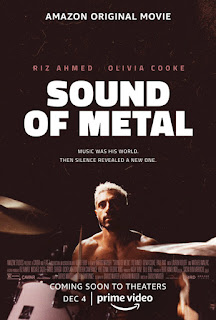 This is a story written by writer/director Darius Cianfrance (Blue Valentine, The Place Beyond the Pines), and has all the emotional pull of his previous films.  Sound of Metal is co-written and directed by Darius Marder—his frequent collaborator.  Their films invariably have such substance it’s always a special treat to see them—not a treat in the sense of a confection, but in their ability to present major life situations and dilemmas in a way that is emotionally sound and recognizable as a real-life event.

We meet Ruben (Ahmed) and Lou (Cooke) in the midst of a punk rock performance with Lou (Janis Joplin-esque) on vocals and Ruben pounding away on drums.   The crowd goes wild, and it’s clear they have a huge following. But yo!, it turns out that after one performance Ruben suddenly stops hearing sounds.  A visit to a doctor informs him that he is going deaf (cause unclear).

This is a real shake-up, and the filmmakers are skilled in demonstrating to viewers what this must be like.  There is the initial denial, followed by a sense of grief that creeps in. The filmmakers are so adept in having viewers identify with the main character, we almost feel at the end that we’ve actually gone through the experience.

These scenes segue into a deaf community where Ruben has been sent to accommodate to his loss of hearing.  Lou can’t stay with him—no one can—so returns to her father in Paris. They’re so much in love, it’s wrenching to see them have to separate, but Lou insists on his going to the camp as a life-saving effort when he throws a tantrum in their mobile home and threatens suicide.

Abrupt shift.  The film does an excellent job in portraying a place where the deaf learn not to see themselves as handicapped and figure out how to live in a hearing world.  Ruben has little talent for introspection, so is befuddled many times by the concepts presented to him; but Joe (Raci) the kindly head of the community is like the father he never had, which makes him stop and think and be willing to do the exercises Joe recommends.  Indeed, Ruben does well and is something of a hero in the community, particularly with the kids.

Now comes another major dilemma.  Ruben can pursue the cochlea implants he has heard about or stay within the deaf community imparting his talents for the benefit of the residents.  Does he reconnect with his wife and try to resume his music career?  Or does he accept Joe’s proposition about accepting deafness as a normal condition and continue to inspire others?

Riz Ahmed gives an award-worthy performance in his ability to inhabit a character, give it charisma, and show agonizing decisions that have to be made. Olivia Cooke is very good, but she is really in only a few scenes.  Kudos to Paul Raci for so accurately and convincingly showing what deaf people face and how they can cope with it optimally.

Sound of Metal is a film for everyone. None of us know when a major physical change in ourselves might take place.  But here is a hopeful way that one can deal with it.

This is another film for contemporary times that pulls for empathy and understanding of the trials some must undergo in their lifetimes.

Posted by donnarcopeland at 8:14 AM