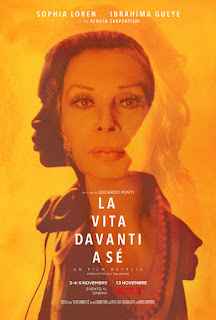 One of the most beautiful movies I’ve ever seen.  It’s so well constructed, suspense is maintained throughout, and all the elements of filmmaking excel.  As director, Edoardo Ponti (son of Carlo and Sophia), keeps a moving pace with the action, complemented by the cinematography (Angus Hudson), the music (Gabriel Yared), and above all the acting.  It’s been almost ten years since Sophia Loren has made a full-length feature film (TV films and shorts in-between), and her lasting talent pushes ahead in full force as Madame Rosa here, an older woman with a remarkable past life now tending to the abandoned children of immigrant sex workers who promise to return and pick up their children.  One of the themes of the film is about mothers, but Rosa is no soft, warm, fuzzy figure; she knows exactly how to aggressively keep street kids under control.  But she is fair and nurturing at the same time, and is mindful of helping the kids appreciate where they came from.

Momo (Gueye) is a kid you like to see make it.  He’s tough, full of pain, and smart, along with being a belligerent smart-ass who disdains authority or almost any tenderness shown him. But he’s not entirely closed up. With time, this Senegalese refugee allows kindness from others to come through, and he is a quick learner, always curious about what is going on around him, and benefitting from experience.

Rosa’s trusted doctor has begged her to take on Momo, a ward of social services. Her first interactions with him (he stole from her while knocking her down in the market) have not been promising, and he is rude to her when they’re introduced.  But Dr. Coen (Carpentieri) is persistent, showing how he has the child’s best interest at heart.  His fine intuitive sense tells him that the two will be good for each other.

It’s rewarding to see how fairness and tolerance for others can build up trust over time.  And The Life Ahead is the epitome of demonstrating such. In addition to understanding how people can get into the circumstances they are presently in, the film expertly weaves in amiable interactions among Jews, Muslims, Blacks, and other groups normally at odds.  It illustrates a promising world that many of us wish for, even though the story is set in a poor part of an Italian southern seaside town.

Based on a Romain Gary novel, The Life Before Us (which was adapted for a 1977 movie called “Madama Rosa” directed by Moshe Mizrahi and starring Simone Signoret), this version includes a number of clever lines that exploit language twists (e.g., “I’m usually good at things I can’t stand”, said by Momo to one of his Muslim benefactors) and meaningful phrases, such as “I’m here; I’m here”, as in the concluding Diane Warren song sung by Laura Pausini.  Powerful images, such as a lioness Momo used as his avatar and the striking image toward the end of black and white hands clasping one another, are profound in their effect.

The Life Ahead will capture your heart while modeling what an ideal world would look like if we could all understand each other and get along.

Posted by donnarcopeland at 11:15 AM