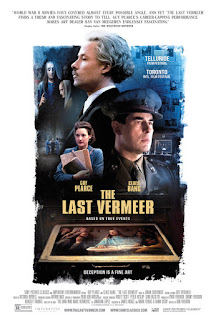 Although this is an interesting story, The Last Vermeer is uneven in its presentation and inserts events in the script that seem to be intended simply to make the film more exciting to the current generation.  John Orloff (pen name, James McGee) wrote the script about a character named Han van Meergren who sold forged Vermeer paintings to the Nazis during WWII.  This story covers the period when he is put on trial for being a Nazi sympathizer.

Central to this story is Captain Joseph Piller (Bang), a Jew who is determined to reclaim all the artwork acquired by the Nazis that had once been owned by Jewish people.  Piller is not very appealing (macho, gruff, willing to use aggressive techniques on people he’s questioning), so makes an unconvincing portrait of a hero.

Piller has managed to apprehend van Meergren (artfully played by Pearce), but has to fight off Minister of Justice Alex de Klerks (Diehl), who Piller sees as someone who makes deals with Nazis to let their sympathizers off.  So he fights de Klerks for custody, but de Klerks is not giving up.  This turns into a struggle between government officials, which is not very interesting.

More interesting are the justifications that van Meergren gives for why he sold the forgeries,  the stories around which he builds his defense, and his own personality.  Just the opposite of the stolid Piller, he is a bon vivant who charms everyone.  In fact, one account is that he charmed the people of Holland so much, they were cheering for him to win his trial.

Guy Pearce is clearly the actor to focus upon, both in terms of his skill and in terms of the character he plays.  In his performance, one can see why audiences might so identify with the villain, they root for him—charming to the nth and giving all kinds of appealing twitches and eye messages.  Bang does very well with the character as written, but unfortunately for the actor, he comes across as chauvinistic and someone so focused on his own agenda, he has no empathy.  August Diehl is superb in his portrayal of an expert who lauds it over everyone, but is discredited in the end.

Forgeries in art tend to be some of the more exciting plots to devotees of art and art history, and I expected to relish this one.  However, the male-dominated, rather convoluted plot in this one is disappointing.  Two redeeming factors are the performance by Guy Pearce and the cinematography of Remi Adefarasin.

Only art lovers will be attracted to this film, but they are very likely to be disappointed by its lack of artistry in the script.