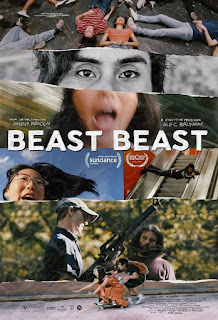 The film cleverly begins with an acting troupe you see rehearsing, and from this, writer/director Danny Madden artfully blends together fantasy and reality, which I think is the main asset of Beast Beast.  Different “games/scenarios” get included throughout, and most of the time we’re clear about what we’re watching.  But not always.  Some of the scenes toward the end make one want to veer toward fantasy rather than reality.

But the film is also a character study of Adam (Madden), one of the main characters who befriends a newly arrived high school student named Nito (Angeles) who seems to be something of a master of the skateboard.  How much older is Adam?  Does he invite Nito to a party and take him to school for some ulterior reason?  We’re not sure; it could go either way.  Just as much a character study is Krista.  We only see her with both parents once during a silent dinner.  Her mother shows her devotion a couple of times, but even she doesn’t seem to have a foggy notion of what Krista’s life is like.  But Krista has experienced—and processed—her contemporary world and realizes that females can be exploited.  And we see Nito, an outsider who wins acceptance by virtue of his canniness and skills.  He’s the one our hearts go out to the most.  Somehow along the way he has developed a basic sense of trust which cements his relationship with Krista, but he has not developed discernment that will protect him from exploitation.

Adam—not necessarily the most popular in his group—has his own podcast about the subject of guns, the technicalities of them, and how to use them to their best advantage in protecting oneself.  Adam reassures his family that selling ads on it earns money, meaning he will be able to support himself from it.  He lives with his mother and stepfather, who is on the verge of kicking Adam out of the family home, to which Adam has a startling reaction.  The family is a little taken aback by his podcast, but seem to accept the rationale that Adam is presenting, that guns have a good purpose.

The shenanigans of some of the students in Adam’s group begin to make the viewer uneasy, especially the apparent “corruption” of the innocent Nito, who is clearly a “nerd” looking for acceptance, but somehow has basic human values (which he has clearly not acquired from any parent).  A tribute to the writing is that all the characters are shown to have believable backgrounds from a psychological standpoint.  Nito lives with a self-centered foster(?) father.  Adam confronts opinions around the dinner table that either don’t interest him or he does not have the slightest idea of their import.  Krista (Chen) has a mother who is clearly devoted to her but does not fathom in the least what her daughter is about or goes through.

Beast Beast has a title that I think is asking the question about “beasts” among us i.e., guns.  It takes on the question about guns and gun rights in a very piercing way.  Who has the “right” of owning a gun and how do we determine that?

Beast Beast will provoke many deep feelings among its viewers by providing a way to evaluate our concepts/beliefs about guns and who should have them.

Posted by donnarcopeland at 8:33 AM