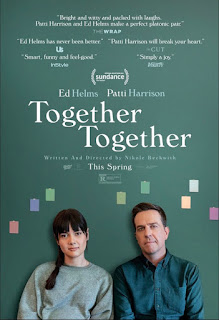 The title Together Together is apt in its description of two people who are “linked”, but who are and aren’t together and have to work that out—along with everyone acquainted with them.  Not many of us have thought about a situation in which a single man wants a family, engages someone willing to be a surrogate, and then must fill in the blanks of what happens during the next nine months.  Not only is it unusual in the first place, but how might it be over the long term?  Those are the questions posed by the filmmakers in a humorous, sit-com-like presentation that could easily be the basis for further discussion.  It’s predictable up to a point, but the writing and acting will keep you engaged.

The story opens with Matt (Helms) interviewing Anna (Harrison).  We get the impression that it’s a match.com situation, but it’s not.  Matt is looking for a surrogate to birth his baby.  After they come to an agreement, we see his neurotic considerations immediately erupt (control issues coupled with health concerns) with her obviously low-key genuine responses.  This will carry on for a while, as they both adjust to their new circumstances.  He regards her solely as the mother of his child, and he wants to make sure that she provides as healthy an “environment” as possible for the developing embryo.  He is overbearing, but Anna usually accedes to him, although with a raised eyebrow at times.

What proceeds are edgy and humorous encounters as each one tries to exult in/hide the news from people they know.  Matt is ready to announce to the world that he is to be a father.  Anna has good reasons to keep her pregnancy quiet.  The movie does a good job in showing the vacillations each player goes through in assessing the situation.  Mostly, it’s Anna trying to be realistic, while Matt bounds through all kinds of emotions.  (A good switch on stereotypes).  To his credit, he wants to be as much involved as possible in the development of the child.  But at one point, Anna realizes they need to have more boundaries.

Although this is a comedy, it pitches us forward to a new world, one in which couples and family have taken on different meanings.  I like its gentleness in introducing situations that may be shocking to the general public to ease the transition into something different ahead of us.

Acting by the experienced Ed Helms is exemplary, and he is well matched by Patti Harrison, who demonstrates all kinds of subtle expressions and actions that reveal her character.  She is ultra appealing.  Nicole Beckwith as writer/director rewards us with a fresh new look at our society and its contents/discontents.  I will look forward to seeing more from her in the future.

Boy meets girl in a way different from what you have possibly imagined.