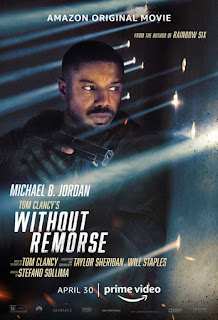 John Kelly is an elite Navy Seal whose home is invaded one evening, and although the intruders were not able to kill him, they did kill his wife.  Wounded, John manages to kill most of them in retaliation, but one gets away.  He realizes this is related to a top-secret operation in Aleppo, Syria he was participated in.  He is tried and put in prison for his crime.  He senses the attack on him is part of some government’s plot, but he isn’t sure what it is.  It was Russians who attacked his home.

John is considered to be a risk both in terms of someone killing him, and in terms of his determination to seek out and kill the one remaining intruder.  While he is in prison, the CIA (which still has its suspicions about him) recruits him for a secret mission in which Americans would be sent to Russia to capture a Russian agent suspected of working against the U.S. for years and bring him to justice.  He may be the one who got away from John’s house, which makes him determined to go on the mission.

The trip is a dangerous one, and sure enough, there are many treacherous encounters that ensue even after they manage to get to Russia.

Without Remorse provides the origin story for Tom Clancy’s John Clark, a character in his Jack Ryan series.  It helps if one is familiar with the background, but the script is so well written by Taylor Sheridan (Hell or High Water, Wind River, Sicario) and Will Staples, it’s exciting on its own, with a mixture of daring and persistence on the part of Kelly, government politics and intrigue, and realistic characters showing their hopes and anxieties.

Michael B. Jordan has a fine record of performances (television’s “The Wire” and “Friday Night Lights”, and movies Fruitvale Station, Black Panther), which have prepared him well for this role of an astute, skillful Navy Seal with a conscience and a compelling force that makes him soldier on against all odds.

The softer but highly competent role of Jodie Turner-Smith provides good balance to the masculine forces all around her.  Jamie Bell serves well as one to be suspicious of, but always equipped with an intelligent plan.  Guy Pearce seems to be able to merge into any character that comes his way; he has a record of a multiplicity of all different kinds of roles, and I always enjoy seeing him in all of them.  His role here is a bit mysterious, which is just as it should be.

The film doesn’t really stand apart from other good films in the genre but will entertain the viewer interested in the genre.

Tom Clancy fans will be treated to fine writing and acting in this thriller mixing intrigue with physical combat.

Posted by donnarcopeland at 10:27 AM