THE MAN WHO SOLD HIS SKIN 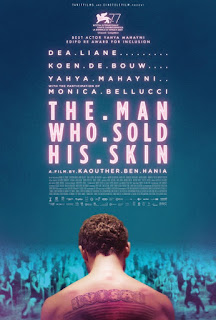 A Syrian man on a train impulsively stands up yelling about “Revolution”—but it’s not political; Sam (Mahayni) just wants a woman to marry him against her family’s wishes.  But such shouts are dangerous in Syria, the man is arrested, jailed, and cannot travel anywhere. Except…he escapes prison and gets to Lebanon.  Meanwhile, his love has been married off to a Belgian, but he sees this as no impediment to his pursuit.  He thinks that if only he can get to Belgium he can recapture his love, Abeer (Liane).

Sam’s chance for that seems to come from a contemporary artist with a seemingly modest proposal:  To tattoo his back as a living piece of art—not with just any tattoo, but of a visa, which, of course, Sam desperately needs.  Sam agrees to the proposal after artist Jeffrey (De Bouw) promises he can arrange for a visa for Sam to go to Belgium.  Everything happens as planned (and we are impressed with the ease with which those who know the system can achieve whatever they wish).

Sam travels with his “handler” Soraya (Bellucci) to Belgium and is ensconced in the high life (five-star hotels, with room service).  When he is displayed as an art piece in museums (sitting still, no wandering away or talking to fans), he is a little impatient, but still appreciates what he has.  However, he has not let go of his love or his fantasies of being with her.

Things get complicated, and the viewer will be entertained by the cross currents of love, political power, and art.  Sam thinks his tattoo is his own right to personal freedom, but he is confronted by decisions he is forced to make that will have far-reaching consequences to those he holds dear. and finally realizes it’s not so simple.

The story is filled with intrigue and political commentary, and the cinematographer (Christopher Aoun) is masterful in putting his own artistic stamp on the proceedings in such an illuminating way it elaborates on the story.  Writer/director Kaouther Ben Hania shows a keen sense for modulation and timing such that the viewer is actively engaged at all times.

Nominated for Best International Feature by the Academy Awards, The Man Who Sold His Skin is well worth your watching time.

The Man Who Sold His Skin gets into the cross currents of love, political power, and art.