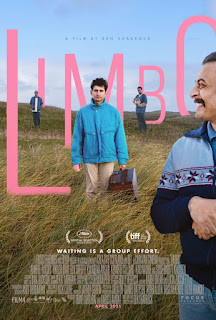 One really gets the meaning of limbo when you wait and wait and wait on a remote Scottish island with a small clutch of young men from places like Syria, Afghanistan, Ghana, and Nigeria who are seeking asylum.  They are housed in modest lodgings and get supplies from the donation shop.  They attend classes on acculturation, applying for a job, etc.  And of course as time goes on friendships begin to gel.

Omar is from Syria and is known for always having his oud (a musical instrument) with him—although he never seems to play it.  He is reserved, but Afghani Ferhad pulls him in by not being too forceful; and they are roommates.  Omar has periodic conversations on the phone with his mother who invariably asks if he is changing his sheets, and other motherly questions.  The parents are in Turkey, but Omar hopes to bring them to Scotland when his immigration is approved.  His brother has remained in Syria to fight against the harsh regime, which is an issue for the family as well.

This is a delightfully quirky film written and directed by Ben Sharrock who is eminently successful in weaving together profound relevant issues with wry humor, funny caricatures, and intrigue.  First, he captures so well the experience of those seeking asylum where waiting is the main game.  (Albeit much better than the current U.S. asylum seekers being detained between Mexico and Texas.)  These hopeful emigres are given reasonable places to stay and some funding, although the locals may sniff and roll their eyes at them sometimes.

We hear about the various frustrations these particular men have to deal with, which makes you appreciate the determination it must take to persevere.  We also come to know their ambivalence and the profound sadness and pull simply to go back home.  But little comic bits and motifs are interspersed here and there—a delivery truck that comes and goes with operatic music blaring, one of the men stealing a chicken and naming it Freddy after Freddy Mercury—along with meaningful episodes such as Omar needing to help the local farmer find missing lambs in a snowstorm.

Cinematographer Nick Cooke’s artful framing makes you want to pause the film at times and just admire his composition.  Long shots of characters peeling an egg or an orange somehow becomes interesting and contributes to everyday realism.  Cooke captures as well the sweeping landscape and beauty of Scotland, where filming took place.

This is the kind of film I like best, where characters are touchingly fleshed out, the story is well told, and creativity abounds.  I was a bit disappointed toward the end of the story when instead of ending with the solo performance, orchestral music took over.  I would have preferred relishing the moments a bit longer and seeing Omar’s reactions.

What better way than Limbo for us to learn what it takes to leave one’s own country and seek asylum in another?