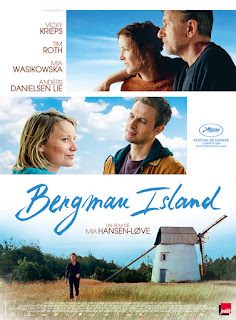 We meet Tony (Roth) and Chris (Krieps) as they are getting on a ferry to Fårö Island, home for 40 years of the renowned writer/director of Swedish films, Ingmar Bergman.  And you can see why he lived there so long; it is lush and evocative of special island places.  But place is not the issue or main point in this production.  Both Tony and Chris are Bergman fans.  He is older, a filmmaker considered as one of the experts on Bergman, and he has been invited to screen his latest production, hence his excitement about visiting the island.  Chris is younger and earlier in her career as a screenwriter.  She has had some success but is currently suffering from writer’s block.  Right away one senses the two are in different places in their minds.  And the story is primarily about their relationship.

Krieps is the lead actor in this production written and directed by Mia Hansen-Løve (All is Forgiven, The Father of My Children), who was acclaimed for her last film (Things to Come).  Having read that she was a close collaborator and partner of the filmmaker Olivier Assayas and her penchant for semi-autobiographical films, I got the impression she identified with Chris, the character in this film.  She is quoted as saying, “the film really came together when I thought of the island of Fårö as a possible setting for the story”, and this line is uttered by the character Chris during the film when she is summarizing her thoughts to Tony about the script she is writing.

In Bergman Island, Chris and Tony seem like a mismatched couple.  He is well established in his career, confident and decisive, but withholding in talking about his work with Chris.  (Although he did say he was writing about “how invisible things circulate within a couple”, which could easily be referring to the two of them, but of course he doesn’t elaborate.)  On the other hand, she is fearful (even of flying), lacks confidence in her abilities, and is frequently asking Tony for help.  When she goes into detail about her ideas for a plot, he interrupts her twice to answer his phone.  That is, there is a fundamental mismatch between them.  Although he denies his lack of interest, it seems obvious from his behavior that he gets bored.  And that’s not surprising, given the plot.

Chris introduces her script plan to Tony by saying, “It’s a series of failure, betrayals, dramas…of impossible mourning and suffering overshadowed by a few memories” and I thought, “Who would want to see that?”  And indeed, one gets the impression her story  (told in film-within-a-film) is about a frustrated love interest of the woman Amy (wonderfully captured by Wasikowska) versus the much more thoughtful, planful first-love Joseph (Lie) who has enough insight to have a conscience.   He points out her ambivalences in relationships by saying, “You want to have two children by two different men.”  (And this is a reference to Chris’ earlier negative reaction when she was told that Ingmar Bergman had 9 children with five wives.)  Joseph’s condescension mirrors Chris’ earlier “harumph!”

As a fan of Bergman films, I was all set to relish Bergman Island; and indeed there are many references to him and to his films (Through a Glass Darkly, Cries and Whispers, Persona), but none seem to relate to Mia Hansen-Løve’s plot.  Rather, it seems to be something of an autobiographical account of her relationship with Olivier Assayas, her partner for a number of years, and more generally with questions about a (female) writer claiming her own voice, particularly alongside a man of with a proven reputation.  There are mostly plusses for this film, but it could have been more explicit and decisive in its plot.

Not an ode to Ingmar Bergman, but a contrast between his career and that of a female screenwriter of today.